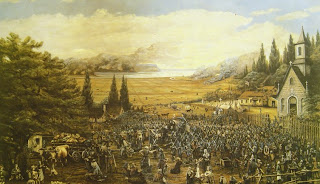 On this day in ...
... 2011 (today), is marked a Day of Commemoration of the Great Upheaval, by 2003 decree of Adrienne Clarkson, then Governor General of Canada, the representative of British Queen Elizabeth II. The commemoration came as an acknowledgment of the 1755 forced removal of French-speaking Acadians (a tragedy on which we've previously posted) -- from the British-held Maritime Provinces of Nova Scotia, New Brunswick, and Prince Edward Island, once known as Acadie. (credit for 1893 depiction, by George Craig, of Acadians being deported from Grand-Pré, Nova Scotia, where commemoration will occur today)