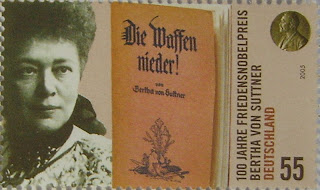 On this day in ...
... 1899, representatives of 26 states concluded a conference they'd begun more than 2 months earlier, on May 18, by adopting the Final Act of the 1st Hague Peace Conference. Russian Czar Nicholas II had convened the meeting, which came about after "[t]he various peace societies led by the indefatigable Baroness Bertha von Suttner, kept up a veritable drum roll of urgings and entreaties." The conference concluded with the adoption of several instruments, among them the 1899 Hague Convention (II) with Respect to the Laws and Customs of War on Land. (credit for photo of 2005 postage stamp honoring von Suttner, the 1905 Nobel Peace Prizewinner about whom we've posted)