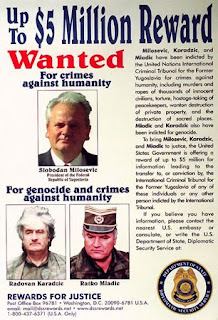 On this day in ...
... 2001 (10 years ago today), his "[j]utting chin raised contemptuously," as The New York Times' Roger Cohen and Marlise Simons colorfully reported, the ex-President of Serbia, Slobodan Milošević, made his 1st appearance before the International Criminal Tribunal for the former Yugoslavia at The Hague, Netherlands. Milošević, depicted at top in the wanted poster at left (credit), refused both to enter a plea and to accept counsel, setting the stage for protracted proceedings that would end not with a verdict, but with his 2006 death during trial-in-progress detention. Still in Hague cells are the 2 other men in the post: from left, Radovan Karadžić, whose trial began in 2009, and Gen. Ratko Mladić, arrested just last month.