Read On! Trauma Psychology In The Wake of the Khmer Rouge

The Extraordinary Chambers in the Courts of Cambodia held at the end of last month an initial hearing in Case 002, which involves surviving members of the Khmer Rouge Standing Committee (below, at right).
The case focuses on the way in which Committee implemented the revolution, ensured compliance, and eliminated dissent by oppressing the people through physical abuse, forced labor, interrogation, torture, and execution.
Less salient from reading the Closing Order (i.e., indictment) is the role of psychological dominance in this effort.
The defilement of Khmer religion, Khmer art, Khmer familial relations, and the Khmer social class structure undermined deeply held societal assumptions. The Khmer Rouge also destabilized the mass psychology that

was secure in those realities. The psychology of the people was thus altered in damaging and enduring ways during the short period of time in which the Khmer Rouge reigned (1975-1979).
In societies that experience war and genocide, trauma significantly impacts the people's psychological well-being. Well-established statistics demonstrate a higher prevalence of trauma-related mental health disorders in post-conflict societies. (See, for example, the work of Berkeley's Human Rights Center and IntLawGrrl guest/alumna Phuong Pham, featured here). The ripple effects of this damage are often incalculable. 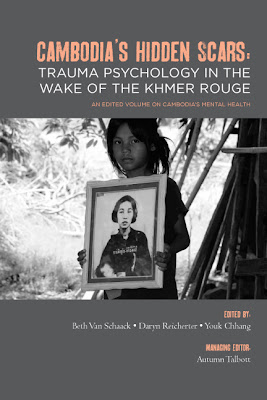 With Dr. Daryn Reicherter, of Stanford University's Department of Psychiatry and Behavioral Science, and Youk Chhang, founder and director of the Documentation Center of Cambodia, I've just completed editing a book on trauma psychology and the Khmer Rouge (cover at left). This book, entitled Cambodia's Hidden Scars: Trauma Psychology in the Wake of the Khmer Rouge, considers the mental health implications of the Khmer Rouge era among the Cambodia populace. (It's available in pdf here.)
The book engages this issue in three parts:
► Part I draws on the expertise of several experts on psychology and Cambodia to consider trauma's effects on human psychology. It offers a statistical and theoretical overview of the mental health consequences at the individual and societal levels, examines the multi-generational effects of severe trauma, and demonstrates the way in which such effects continue to impact the nation and its development. Specialists in trauma mental health, including principals from the Transcultural Psychosocial Organization in Cambodia, discuss the increased rates of post-traumatic stress disorder (PTSD) and major depression, among other major mental health disorders, in the country. Contributors also reveal the staggering burden of such a high prevalence of societal mental illness on a post-conflict society.
► Part II features the work of legal experts, including IntLawGrrls Jaya Ramji-Nogales and Anne Heindel. This Part explores the interplay between trauma psychology and the ECCC. In particular, it looks at the psychological effects of the work of the Court on participants, witnesses, and civil parties, and examines the concept of justice as it relates to trauma psychology. Several submissions are critical of the Court's reaction to the psychological state of the survivors. Jaya's contribution (co-authored with her student Toni Holness) discusses the way in which reparations can offer a form of accountability for the mental health of survivors. Other contributors propose ways in which the Extraordinary Chambers in the Courts of Cambodia can better accommodate victims and witnesses to avoid re-traumatization and ensure a meaningful experience with justice.
► Part III examines the resources available (or not) for interventions and for the treatment of mental suffering in Cambodia. It assesses the public and private mental health system in Cambodia as it relates to the treatment of trauma-related mental health. This is accomplished through a series of inclusive studies extracting the opinions of mental health providers and administrators struggling to meet the incredible need in a complicated and highly burdened system. The book closes with a set of recommendations for addressing the widespread mental health issues within the society.
We welcome your thoughts...

Thanks for posting this. It's such an understated aspect of the ongoing harm caused crimes under international law, and of course has relevance everywhere these crimes occur. Thanks also for your generosity in making the book available in PDF.

Elce,
Unfortunately, the entire text is no longer available in PDF. But, if you want to email me separately, I can send you a copy.
Beth

Psychological trauma may set in after a distressing or life-threatening event.
psychotherapy new york