Read On! Woman against war criminals

Thanks to our blogreader Anne-Marie Bilodeau, at Amnesty International in Canada, for news of a new book of note: Zones sensibles, une femme contre les criminels de guerre (2011). The "woman against war criminals" who wrote the book is Céline Bardet, an international affairs consultant whose prior posts include Head of Legal Department, Brčko, for the Office of the High Representative in Bosnia and Herzegovina. (book cover credit)
In her recent discussion of the book with Marine Deffrennes -- posted as an interview at Terrafemina, an online, French-language women's magazine -- Bardet related that her interest in international criminal law was piqued by the work of the International Criminal Tribunal for the former Yugoslavia. She wrote a thesis on the Erdemović case, and eventually worked with ICTY President Claude Jorda; these experiences led to the Bosnia work that composes the core of her book. 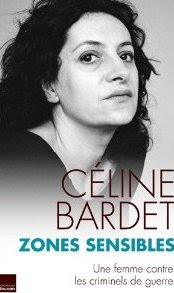 Touching on one of the subjects of her book, Bardet expressed concern about lingering impunity in Brčko, site of numerous atrocities during the 1990s conflict in the Balkans:

'Many victims run into their torturer at the market or at a bend in the road. People are aware of this and and do not dare testify, because it will be found out, and they fear repercussions.'

Like the interview, the book looks to be well worth a read. And the message in the quote -- that many perpetrators are likely to remain free notwithstanding the entry this week of the ICTY's last fugitive, Goran Hadžić, into custody at The Hague -- is well worth pondering.