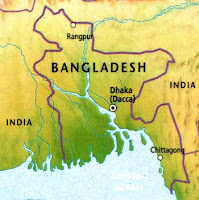 Almost 40 years later, the people of Bangladesh will finally see justice done for war crimes and other atrocities committed during the 1971 War of Liberation. (map credit)
Or will they?
The International Crimes Tribunal (ICT) of Bangladesh, which just in the last year began gearing up to try individuals accused of war crimes, crimes against humanity, genocide, mass rape and other international crimes, is certainly necessary to provide accountability and to address longstanding cries of impunity for the alleged criminals. However, there has also been sharp criticism of the ICT’s statutes, rules of procedure, and practices, as well as deep concern over a related amendment to the Bangladesh Constitution.
Critics have pointed specifically to the lengthy pre-charge detention of suspects, interrogation without counsel present, inability to challenge the jurisdiction of the tribunal or make interlocutory appeals, lack of presumption of innocence, potential for self-incrimination, lack of protections for witnesses and victims, and overall lack of due process rights for defendants as just a few of the numerous infirmities present in the ICT. Further, many have characterized the Tribunal as politically motivated, adding to an atmosphere in Bangladesh that is already fraught with political tension.
Justice can only be done for the victims, their families, and the perpetrators if the Tribunal is fair and is seen as being fair by the people of Bangladesh and the international community. Bangladesh is a key participant in this international community, given that it is the first state in South Asia to become a party to the Rome Statute of the International Criminal Court, as well as a signatory to the International Covenant on Civil and Political Rights.
Perhaps in the spirit of that participation, the Bangladesh government recently invited Stephen J. Rapp, U.S. Ambassador-at-Large for War Crimes Issues, to come to Dhaka. The Foreign Secretary, Mohamed Mijarul Quayes, said that he invited Rapp to ensure the “fullest credibility” in the tribunal process. In anticipation of the visit, the Bangladesh Foreign Secretary reportedly stated,

'There are two things we want from this process: For it to be transparent and consistent with international standards.
'We hope these consultations will help.'

Since that first meeting, Rapp has visited Dhaka twice. In March, Rapp submitted to the Bangladesh government a 10-page letter setting forth a number of concerns and recommendations. At the heart of Rapp’s interest, like other international concern, is the perceived need to have the laws and procedures of the ICT consistent, or at least up to par, with the standards of international law and procedures of well-respected international forums, such as the International Criminal Tribunal for Rwanda and the International Criminal Court.
Bangladesh now has a unique opportunity to have trials in its domestic court for international crimes of the most heinous nature. Trials of such importance should be fair and consistent with international standards. They must be, for justice to prevail.

A Brief History
As set out here, the International Crimes Tribunal was established in 1973 to address crimes that had been committed during the 1971 War of Liberation, in which East Pakistan seceded from West Pakistan and ultimately

became the independent state of Bangladesh. The armed conflict arose out of increasing discontent in the East and a national election won by Bengali nationalist leader, Sheikh Mujib.
The fighting began in March 1971, when West Pakistan launched “Operation Searchlight” against the Bengalese population in East Pakistan, with the aim of quelling nationalistic tendencies. This operation ended ten months later, when India invaded Pakistan and defeated the Pakistani forces in a matter of days. (credit for 1971 photo of Indian tanks en route to Dhaka)
Bangladesh declared its independence shortly thereafter, and Sheikh Mujib became the new country’s first prime minister.
The International Crimes (Tribunals) Act (ICTA) was passed in 1973 with this stated purpose:

'[T]o provide for the detention, prosecution and punishment of persons for genocide, crimes against humanity, war crimes, and other crimes under international law.'

At the time, the ICTA was a significant contribution to the development of international criminal law. However, several legislative and/or executive orders effectively halted the trials and granted immunity to certain select groups. An example was the Bangladesh National Liberation Struggle (Indemnity) Order, issued in 1973, which gave immunity to all “freedom fighters” in connection with the struggle for liberation. Additionally, Prime Minister Sheikh Mujib declared a general amnesty for all Bangladesh citizens who had collaborated with West Pakistan, except those accused of murder, rape, arson, or genocide. Later, Pakistani soldier prisoners of war, including those who had committed war crimes, were repatriated to Pakistan without ever being charged. And, in 1975, individuals who had been tried and convicted under the Collaborators Order were pardoned and the Order repealed.
The ICTA was never repealed, however. It now stands as a mechanism with which to prosecute Bangladeshi citizens who were not previously given immunity for international crimes committed forty years ago. 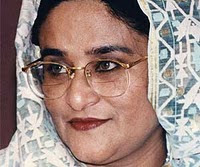 The ICT lay virtually inactive until 2008, when the current Prime Minister, Sheikh Hasina (right), ran on a campaign to prosecute “the war criminals” from the Liberation War. After her victory (prior IntLawGrrls post), and with her party, the Awami League, in power, Parliament passed a resolution in early 2009 calling for speedy trials under the ICTA. (photo credit) That statute was marginally amended later in the year. In mid-2010, the Tribunal issued its Rules of Procedure, and within a short time, six individuals had been arrested and detained by the authority of the Tribunal. No charges have been brought to date.

International Community Voices Its Concerns
Well before U.S. Ambassador Rapp entered the debate, the international human rights and humanitarian law community had already expressed concern about the ICT. It claimed that the rules lacked adequate protections for the defendants and witnesses, that a related constitutional amendment was fundamentally unfair, and that the trials were politically motivated. Human Rights Watch submitted a letter expressing concern and making recommendations to the Bangladesh government, as have groups like the War Crimes Committee of the International Bar Association and the International Center for Transitional Justice. While the government has not rejected such recommendations outright, it has not publicly responded to such suggestions quite as positively as it has to Rapp’s participation, perhaps for obvious reasons.
Importantly, Rapp brings a valuable experience and perspective on war crimes issues. Formerly the Senior Trial Attorney and Chief of Prosecutions at the International Criminal Tribunal for Rwanda and then the Chief Prosecutor the Special Court in Sierra Leone, Rapp led the prosecution of former Liberian President Charles Taylor.
Rapp was welcomed in Dhaka by the Bangladesh government twice this year. The U.S. dignitary had the opportunity to meet with Tribunal judges, the registrar, investigators, prosecuting counsel, and defense counsel, and to visit the Liberation War Museum. Rapp also met with the Foreign Minister, the Law Minister, and the Foreign Secretary, as well as representatives from the Bangladesh Supreme Court Bar. His visits are of keen interest as they are the first high-level international intervention in the ICT.

(Coming tomorrow in this 2-part report, a version of which was posted at the Crimes of War Project:Specific concerns of Rapp and others with the Bangladesh International Criminal Tribunal. Part 2 is here.)