(Honored to welcome back alumna Cecilia Marcela Bailliet, who contributes this guest post) 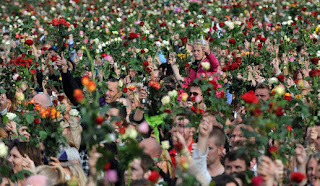 We at my home institution, the University of Oslo Law Faculty, are very moved by the expressions of sympathy extended by so many IntLawGrrls in reaction to the horrific acts of terrorism in Oslo last week.
Right-wing extremist Anders Behring Breivik bombed government buildings in central Oslo, killing 8 persons, and then proceeded to assassinate 68 persons (the majority of them youths) at a Labour Party youth camp in Utøya.
It has been reported that Breivik sought to eliminate the next generation of Labour Party leaders, as he held them responsible for promoting multiculturalism and flexible immigration. In fact, however, the Labour Party had supported restrictive amendments to the immigration law that curtailed family reunification significantly.
On that day in Utøya, several youths saved their own lives by swimming away from the island, hiding in the forest and among the grottos, or playing dead. There were many acts of heroism conducted by private individuals, who saved the children by plucking them from the water in boats.
The police were delayed 90 minutes, in part due to the diversion of the bomb. They arrested Breivik and he is currently being held in detention. The people of Oslo have filled the streets of the city with flowers and held a peaceful gathering of 200,000, holding roses in affirmation of the country’s core values of openness and democracy (above; credit).
Due to the amount of inquiries since last week's event, our research fellow, Nils Christian Langtvedt, has prepared an overview of the legal criminal system and legal issues related to the prosecution of Breivik. With thanks to Nils for his contribution, we reprint it in full here:

The Legal Process
At the first level, the judge will have two lay judges. In complicated cases the court will be composed of two judges and three expert lay judges.
The victims are not parties to the case, nevertheless they may serve as witnesses and tell their stories. After judgment is delivered, an appeal may be lodged within 14 days. The Appeals Court will consider whether there has been an error in the handling of the case, such as whether the establishment of guilt or the punishment is incorrect. The appeals court is composed of three judges, sometimes four, and other cases are subject to a ten person jury. Further appeal to the Supreme Court is possible. The judgment of the Supreme Court is final and may only be appealed to the European Court of Human Rights.

Pre-Trial Detention
Detention may be pursued if the authorities believe that it is necessary to investigate the case. The purpose of the detention is to prevent the accused from tampering with the evidence or commit another crime. Detention is not considered to be a criminal punishment, rather a coercive procedural method in criminal cases.
If the Court decides to detain the accused, it sets forth the time limit for such detention. This period will not normally be longer than 4 weeks, but it may be extended by up to 4 weeks at a time. The Court can under certain circumstances establish a longer period of detention, and in the case of Anders Behring Breivik, the Court granted the state’s request for 8 weeks detention.
A ban on reception of letters and visitors is possible, as well as a ban on newspapers, and isolation from other inmates. The Court set the isolation period for Anders Behring Breivik at 4 weeks. The accused has a right to private oral and written communication with his defender.

Detention
Detention is a punishment that can be pursued in the alternative of incarceration. It is pursued in cases involving serious crimes with a high risk of recidivism. Detention is conducted within penal system and is not subject to time limits. An order of detention shall establish the time period that normally will not extend past 15 years and cannot surpass 21 years. The minimum period of detention shall not be over 10 years. If the authorities consider the individual so dangerous that his release would pose a risk to society , the Court may extend the detention period up to 5 years at a time. There is no maximum limit for extensions.
In theory, the accused may spend the rest of his life in detention, pursuant to Court orders extending his detention 5 years at a time.
Anders Behring Breivik is being charged with violating the terrorism provisions of the penal code which carry a penalty of 21 years incarceration.
Furthermore, the prosecutors are considering pursuing a charge of violation of crimes against humanity which carry a maximum penalty of 30 years incarceration. This is a less plausible charge. The crime refers to actions by a State, organization connected to a state, or a paramilitary organization. It is unlikely that the Norwegian provision may be applied to an individual’s act without a relation to a larger organization.

What if he is found insane?
In order to be criminally punished, the individual must be found to be sane at the time of the commission of the crime. Breivik is subject to court-appointed psychiatric evaluation to determine whether or not he is psychotic. If he is found to be considered insane at the time of the commission of the crime, he may be committed to a psychiatric institution if it is considered necessary for the protection of the society. This type of detention is not subject to time limits, but the law requires that the Court review the case regularly in order to establish whether there is a risk of recidivism.

by Cecilia Marcela Bailliet at 1:58 AM