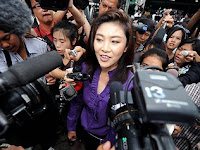 Thailand is the latest country to select a woman to lead it.
Following parliamentary elections this weekend, Yingluck Shinawatra is slated to become Thailand's 1st woman Prime Minister.
It is the 1st elective position for the 44-year-old businesswoman (right), whose father and siblings include a former mayor and several former members of parliament. (photo credit Agence France-Presse) Her brother, Thaksin Shinawatra, was ousted as Prime Minister in 2006, following a 5-year tenure that drew criticism from human rights groups. Predictably,

Yingluck's critics say Thaksin, who is in self-imposed exile in Dubai, is the one who will be pulling the political strings once she takes office.

At least one voter saw it otherwise:

'I've seen too many men failing to run the country,' one Bangkok businesswoman told Reuters during the election campaign. 'Maybe this time, things will be different.'