Toward justice for Irish Magdalenes

(Delighted to welcome back alumna Siobhán Mullally, who contributes this guest post) 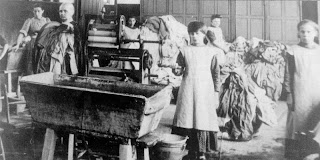 The UN Committee Against Torture has handed down its Concluding Observations on Ireland’s initial report under the 1984 Convention against Torture and Other Cruel, Inhuman or Degrading Treatment or Punishment.
The Committee expressed its grave concern at the State’s failure to protect girls and women who were involuntarily confined between 1922 and 1996 in the Magdalene Laundries. (credit for early 20th C. photo above right of an Irish Magdalene "asylum")
Ireland’s Magdalene Laundries and their history of abuse, neglect and human rights violations over many decades was the subject of the award winning 2002 film, The Magdalene Sisters, itself inspired by the 1998 documentary Sex in a Cold Climate. The plight of the women and girls confined in the laundries, operated by four Roman Catholic religious orders in Ireland in ten separate locations, had gained widespread media attention with the discovery of 133 graves at the High Park Convent in 1993.
The 2002 Residential Institutions Redress Act, which sought to address the abuse and neglect suffered by Irish children in industrial schools and other state-licensed residential institutions, excluded the Magdalene Laundries from its scope. Since then the Justice for Magdalenes Campaign, and more recently the National Women’s Council of Ireland, have called for:
► A full independent inquiry into the abuses endured by women and girls in the Laundries; and
► The establishment of a restorative justice and reparations scheme.
Until recently, their calls had met with repeated disclaimers of responsibility from the Irish Government, as Government ministers denied ‘direct State involvement’ in referrals to the laundries and in their operations. The position of the Government, as recently as 2009, was that the laundries were 'privately owned and operated and did not come within the responsibility of the State.' They were not, the Government argued, subject to state regulation or supervision and so were not brought within the scope of earlier redress schemes. This position has been gradually revised, with increasing acceptance of the State’s direct role in referrals to the Laundries.
The public / private divide evident in the State’s position was questioned by the Irish Human Rights Commission in its assessment report in 2010, which noted that women and girls were, formally (through the Courts) and informally (by State and non-state actors), referred to the Laundries and involuntarily confined there.
Many of those referred were unmarried mothers whose children were placed for adoption. As early as 1970, the Kennedy Report on the Reformatory and Industrial Schools System found that

‘girls considered by parents, relatives, social workers, welfare officers, clergy or Gardai to be in moral danger or uncontrollable’

were placed in the Laundries. Those persons confined included minors and other vulnerable persons including some with intellectual disabilities. 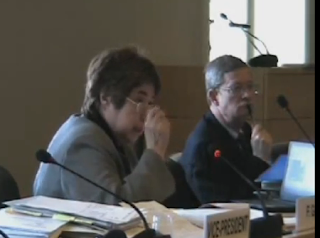 The specific question of state responsibility was addressed by the Committee Against Torture in Concluding Observations issued in early June, at the end of the Committee's 46th session. Video clips of its hearing on Ireland -- including one of questions put to the State by IntLawGrrls alumna Felice Gaer (left) -- may be seen here. (The 46th session also produced Concluding Observations on reports from Finland, Ghana, Kuwait, Mauritius, Monaco, Slovenia, and Turkmenistan.)
In its Concluding Observations on Ireland, the Committee notes that the State failed to regulate the operations of the Laundries or to inspect them, in circumstances where it is alleged that physical, emotional abuses and ill-treatment occurred amounting to breaches of the Convention (articles 2, 12, 13, 14 and 16).
The Committee called on the Government to institute prompt, independent and thorough investigations into all allegations of torture, and other cruel, inhuman and degrading treatment or punishment that were allegedly committed in the Magdalene laundries and to ensure that all victims obtain redress and have ‘an enforceable right to compensation including the means for as full rehabilitation as possible.’

The Committee’s observations and findings reflect the success and continuing advocacy of the Justice for Magdalenes campaign, represented at the Committee's NGO hearings by Maeve O’Rourke (left), Harvard Global Human Rights Fellow. (photo credit)
A key issue highlighted by the Campaign is the State’s responsibility for continuing violations of the Convention arising from the failure to establish an inquiry into the allegations made. (The last Magdalene Laundry in Ireland closed in 1996. Ireland ratified the Convention in 2002.)
The failings of the Irish State to adequately protect children in residential institutions in Ireland is now well documented.
The Report of the Commission to Inquire into Child Abuse (the Ryan Report), published in 2009, documented the ‘terrible wrongs’ that were perpetrated on children at risk and the failings of the State to adequately protect children in its care.
Emily O’Reilly (below right) (photo credit), Ireland's 1st woman Ombudsman, commenting on the publication of the Ryan Report, noted:

'If things were hidden, they were hidden in clear sight [...] the incarcerated Magdalene women in their Madonna blues and whites who walked the open streets of towns and villages in church processions. Judges knew, lawyers knew, teachers knew, civil servants knew, childcare workers knew, gardaí knew. Not to know was not an option.'

The Government’s denial of responsibility for abuses occurring in the Magdalene Laundries had been challenged by a November 20101 report of the Irish Human Rights Commission calling on the Government to establish an independent inquiry. The Commission’s report documents a range of human rights violations that may have occurred in the Magdalene Laundries, for which the State could be accountable. These include:
► Forced or compulsory labour;
► Servitude;
► Inhuman and degrading treatment; and
► Arbitrary detention.
Further questions arise as to end-of-life issues, procedures followed in burials, exhumation of graves and cremations. An ongoing question concerns the information and tracing services provided to the children of women in the Laundries who were placed for adoption, often through irregular arrangements. Many have complained of the lack of cooperation from the religious orders than ran the Laundries and adoption services.
The Irish Government has now responded to the Committee's Concluding Observations.
On June 14, the Government announced the establishment of an interdepartmental Working Group, with an independent Chairperson, to

‘clarify any State interaction with the Magdalene Laundries and to produce a narrative detailing such interaction.’

The Working Group will have three months to produce an initial report.
The Government’s move has been generally welcomed, though many have expressed regret at the absence of a formal apology at this stage.
This October, the UN Human Rights Council will review Ireland for the first time through the Universal Periodic Review mechanism. This upcoming review provides the Government with an opportunity to demonstrate its commitment to finally remedying the historical injustices and abuse encountered by the Magdalene women and girls.

Let’s hope that every person who saw, suspected or suffered clergy crimes and cover ups in the Magdaline laundries will find the courage and strength to speak up, call police, expose wrongdoing, protect others, and start healing.