UN Women on justice for women

The United Nations Entity for Gender Equality and the Empowerment of Women (also known as UN Women) has just published its first edition of Progress of the World’s Women, as IntLawGrrl Dina Francesca Haynes has noted.
The report, subtitled In Pursuit of Justice, recognizes that while great strides have been made on paper, too little of the legal and policy reform achieved over the past several decades has translated into discernible change in the lives of most of the world’s women.
The report is divided into two parts, which focus, in turn, on:
► Justice sector reform; and
► Women’s progress vis-à-vis the Millennium Development Goals.
In my post today, I will detail the first part of the report, subtitled "Making Justice Systems Work for Women." This part is divided into four chapters: legal frameworks, the justice chain, legal pluralism and justice for women, and justice for women during and after conflict.

Legal Frameworks
Chapter One sets out a three-part reform agenda for governments to move toward realizing gender equality:
► End explicit discrimination against women.
The report notes that 48 countries still limit women’s right to work in certain industries, and that this exacerbates women’s poverty.
In 50 countries, the minimum legal age of marriage is lower for females than it is for males. Early marriage restricts women’s educational opportunities and exposes women to the risks of early pregnancy and childbirth.
Some countries have made progress, however, particularly in the area of family law. The report

cites the case of Uganda Association of Women Lawyers and others v. Attorney General, in which a Ugandan court struck down as unconstitutional a law that made it more difficult for a woman to initiate a divorce than a man. (image credit) According to the report, the ruling resulted in the introduction of new family law before the Ugandan Parliament, one that will guarantee equal rights to divorce.
► Extend protection of the rule of law to the private domain.
The report points out that women remain vulnerable to violence and discrimination in the private domain, particularly within marriage and the informal employment sector.
For example, even though 125 states have passed domestic violence legislation, many still fail to recognize marital rape as a crime. 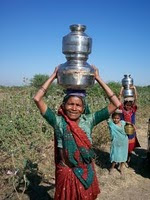 Additionally, given the high percentage of women employed outside of the formal sector—in homes, small businesses and on farms—failure to include such jobs within the ambit of minimum wage and other labor legislation leaves many women (as many as 80% in sub-Saharan Africa and South Asia) without vital economic and personal protection. (photo credit)
► Take responsibility for the law’s impact on women.
The report urges states to ensure that laws are implemented.
For example, while 117 countries have passed equal pay legislation, women continue to be paid 10% to 30% less than men.
Similarly, while 115 countries recognize equal property rights for women, the supremacy of discriminatory customs in some countries has resulted in little discernible access to land for women. The Report states that in Kenya, for example, women hold only 5% of registered land titles. Female parliamentarians in Rwanda (who account for over 50% of the national legislature) (prior IntLawGrrls post) have advanced legislation ensuring equal inheritance and titling rights. This legislative success suggests that gender balance in the political branches can lead to policy reform.

Justice Chain
Chapter Two examines the “implementation gap” between policy and practice.
It recognizes a high rate of attrition among female victims of crime, along a “justice chain” that includes police, forensics, prosecutors, legal aid, and courts. Reasons for this attrition include social barriers such as lack of knowledge about rights and the justice system, lack of access to justice systems without male relatives, and stigmatization associated with being a victim of sexual violence. Complicated reporting mechanisms, high administrative fees, and male-dominated police forces and judiciaries also impair women’s access to justice.
The report recommends that states reduce these barriers by implementing procedures and supporting institutions that increase women’s access to redress.
For example, the Ministry of Health in Kenya introduced guidelines requiring that rape survivors be provided emergency contraception and HIV anti-retroviral treatment.
In Fiji, where two-thirds of women have been abused by their partners, 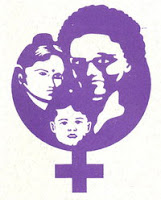 the Women’s Crisis Centre (logo at right) (credit) provides counseling and legal advice to survivors of violence.
Specialized courts, such as those in the Democratic Republic of the Congo, and gender-responsive policing, such as the all-female peacekeeping unit that was deployed to Liberia (prior IntLawGrrls post), can also facilitate women’s access to justice.

Legal Pluralism & Justice for Women
Chapter Three acknowledges that most of the world’s women live in states where two or more legal systems—civil, common, religious, and/or customary—govern. In such pluralistic States, protection of human rights can vary among legal systems, some of which hold primary jurisdiction over subject matters that greatly impact women, such as family law. The report notes, by way of example, that some customary and religious systems do not have sanctions against domestic violence.
In addition to harmonizing informal justice systems with the equal rights provisions of the formal sector, the report recommends, first, increasing women’s leadership in the informal justice system and, second, training civil society to assist women in challenging discriminatory customs.
One example of such an effort is UN Women's sensitization program in the traditional justice sector in Burundi, which has resulted in women accounting for 40% of bashingantahe, or traditional court members.

Justice for Women During & After Conflict
Chapter Four takes stock of several advancements in international law with respect to gender and conflict, including the recognition of rape as a war crime.
Yet the report acknowledges that, out of the 171 cases completed by the International Criminal Tribunals for the former Yugoslavia and Rwanda and the Special Court for Sierra Leone, less than 30% have produced judgments in which the conviction involved evidence or findings of sexual violence.
It thus states that prosecutions need to be increased and that barriers to international justice (which are the same as the barriers women face in domestic systems) need to be reduced.
The report further argues that reparations programs must be gender-sensitive and that women must be included in post-conflict reconstruction.
Interestingly, the report notes that women hold 27% percent of parliamentary seats in post-conflict states, as compared to only 11% in non post-conflict States.