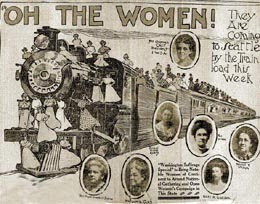 It will come as no surprise that suffragists in the United States claimed this date -- the anniversary of the American Declaration of Independence -- as their own.
It's well known that in the months before that declaration issued, Abigail Adams pressed drafters to "Remember the Ladies." Neither her husband John nor the principal drafter, Thomas Jefferson, heeded her plea.
Also well known: campaigners for women's rights modeled the 1848 Seneca Falls Declaration of Sentiments after the 1776 document.
Less known but worth noting is the role Independence Day played in a 1909 campaign for women's suffrage in Washington.
As detailed in this 2008 essay by Paula Becker, campaigners in that Pacific Northwest state preferred a low-key approach -- the 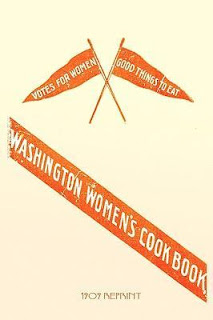 "so-called 'still hunt' strategy"-- to the in-your-face militancy of the Pankhursts and other British suffragists.
A centerpiece of this strategy was the Washington Women's Cookbook (1909), sold door-to-door as a way personally to lobby women in order that they might persuade their husbands, fathers, and sons to vote to grant women the vote. (photo credit)
Then, during the 1st week in July 1909, activists from across the country arrived in Seattle -- many by a train dubbed the Suffrage Special (credit for above right depiction) -- to hold a suffrage convention alongside AYP, the Alaska-Yukon-Pacific Exposition, the state's 1st World's Fair.

On the 4th of July, a Sunday, famous suffrage leaders took to the pulpit to spread "the gospel of woman suffrage," Becker wrote. They included several subjects of prior IntLawGrrls posts -- Rev. Dr. Anna Howard Shaw, Florence Kelley, and Charlotte Perkins Gilman -- and others, like Pauline Steinem, who blazed a feminist path that her granddaughter Gloria would follow.
Days after this spate of sermonizing, the convention ended with July 7 "Suffrage Day" fesitivities at the AYP Fair itself. (photo credit)
As a consequence of these and other campaign activities, the male electorate approved suffrage on November 8, 1910. Thus did women in Washington eventually win a measure of independence.
by Diane Marie Amann at 5:02 AM