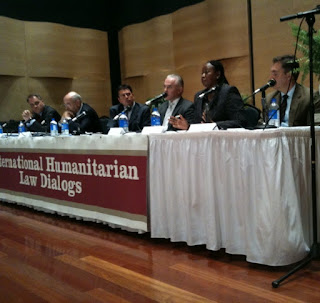 In the spirit of humanity and peace the assembled international prosecutors and their representatives here at the Chautauqua Institution ...
Recognizing the continuing need for justice and the rule of law as a cornerstone to international peace and security;
Underscore that only through the rule of law will peoples of the world be truly free from want and fear and have an ability to freely worship and speak, principles that are the cornerstone of the United Nations Charter;
Note with pride the awarding to H. W. William Caming and Benjamin Ferencz the second annual Joshua Heintz Humanitarian Award for distinguished service to mankind;
Note with satisfaction the handing over to the International Criminal Tribunal for the Former Yugoslavia Ratko Mladic and Goran Hadzic for a fair and open trial; thus signaling to all fugitives from international justice the international community’s commitment to bringing them to account;
Note with satisfaction the International Criminal Tribunal for Rwanda’s arrest and commencement of proceedings against fugitive Bernard Munyagishari, the successful application for the referral of Jean Uwinkindi’s case to Rwanda for trial, and ongoing efforts to preserve evidence against three additional fugitives for use in future trials;
Note the conclusion of the first trial against a former sitting head of state, Charles Taylor, by the Special Court for Sierra Leone, and the completion of the trial against Thomas Lubanga, the first trial of the International Criminal Court;
Note the issuing of an arrest warrant by the International Criminal Court against Muammar Gadhafi, Saif al Islam, and Abdullah el Sennussi, and call for their arrest and prompt handover to the Court;
Note with satisfaction the issuing of an indictment by the Special Tribunal for Lebanon against four individuals alleged to be involved in the 2005 assassination of former Lebanese Prime Minister Rafik Hariri and others;
Note the commencement of the proceedings against the four most senior living members of the Khmer Rouge regime but also the widespread concern for the independence and integrity of the Extraordinary Chambers of the Courts of Cambodia;
Are aware of the movement by peoples all across the Middle East and elsewhere to establish representative governments, and call on all parties to respect the humanity involved in these events and to follow the precepts of international humanitarian law;
Further note with continued concern the outstanding arrest warrants issued by international courts and tribunals, requiring the cooperation of state parties and the international community as a whole for their enforcement;
Now do solemnly declare and call upon the international community to keep the spirit of the Nuremberg Principles alive by:
Continuing international support to all nations seeking to adhere to the rule of law and promote accountability in their societies;
Urging all parties to the ongoing armed conflicts in the Middle East to respect international humanitarian law, in particular, by refraining from targeting protected persons and places;
Cooperating with efforts to locate, arrest, and hand over to the various international courts and tribunals those individuals who have been indicted for international crimes wherever found;
Urging States and the international community to end impunity for the gravest of crimes by refusing to include or accept amnesty or immunity clauses in peace agreements;
Urgning States and the international community to continue to support international justice by ensuring adequate resourcing of all courts and tribunals and for the residual mechanism of those courts and tribunals whose mandates are coming to an end;
Recognizing the importance of complementarity between the efforts of national prosecuting authorities to enforce their own laws and those of the international courts and tribunals;
Emphasizing that independence of Prosecutors of international criminal courts is essential to the exercise of their mandates and the furtherance of international criminal justice, and urging all States and organizations to recognize and support that independence.

Andrew Cayley
Extraordinary Chambers for the Courts of Cambodia

[Daryl A. Mundis for] Daniel A. Bellemare
Special Tribunal for Lebanon

Robert Petit
Extraordinary Chambers of the Courts of Cambodia