"Why haven't we heard anything about a Security Council referral of the Syria situation?" I asked an audience earlier this week.
"Syria situation" referred, of course, to President Bashar al-Assad, whose "massive crackdown" on protests in Syria reportedly has caused the deaths of more than "1,700, mostly protesters," plus the arrests or disappearances of "well over 10,000 people."
My question came toward the end of my talk entitled "International Criminal Tribunals and International Politics," part of the kickoff plenary of this week's global criminal justice conference in Ottawa, Canada.
Among the issues I'd addressed was the Libya box in which the International Criminal Court and the U.N. Security Council seem to have squeezed themselves:
► In February, the Council unanimously set the ICC in motion by referring to it allegations of unlawful killings of Libyan civilians.
► 4 months and 1 day later -- warp speed for the ICC-- Pre-Trial Chamber I issued arrest warrants, as requested by the prosecution, against Libyan leader Muammar el-Qaddafi and 2 others.
► In July, 3 of the P-5 Security Council members -- France, the United States, and Britain -- indicated that they'd permit Qaddafi to escape the ICC prosecution, as long as he left office and remained in Libya.
► Immediately after that, a spokesperson for the Court insisted that the warrants must be executed, a position consistent with a 2007 Office of the Prosecution policy paper that contends the prosecutor has no power to withdraw in these circumstances.
Given the constraints of this justice/policy box, it seems unlikely these same actors would follow the ICC path with respect to Syria.
So I surmised in Ottawa.
Appears I may have surmised too soon.
Yesterday the Los Angeles Times' Borzou Daragahi reported that, according to an "jurist" and a "diplomat," both unnamed, "[a]t least one Western government is bankrolling a project to gather evidence" against Assad. The jurist reportedly is "assembling testimony from Syrian refugees that conforms to standards of international law necessary to sustain a war crimes trial at the International Criminal Court."
The diplomat, Daragahi wrote, "stressed that no decision had been made among d 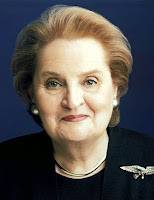 iplomats to press the Security Council" -- though 2 erstwhile officials, U.S. Secretary of State (left) Madeleine Albright and her Jordanian counterpart, called for a Council referral of Syria to the ICC in a June 30 op-ed.
The prospect raises concerns. Concerns about:
► The capacity of the ICC to take on yet another fraught situation, against an incumbent head of state, even as violence continues;
► The wisdom of asking the Court to do just that;
► The intentions of Security Council members in inviting arrest warrants yet, apparently, remaining open to negotiated exile; and
► The advisability of an ICC policy that limits its own discretion in such a volatile international arena.

Have learned today of another commentary in similar vein, at http://www.internationallawbureau.com/blog/?p=3110.