The principle of complementarity undergirds the International Criminal Court’s admissibility regime. And yet, in the negotiations leading up to the 2010 Review Conference in Kampala, Uganda, delegates did not fully focus on the potential for the addition of the crime of aggression to destabilize the Court’s complementarity regime. (See our prior discussion of this concern here).
The only guidance from the ASP came in the form of two interpretive Understandings that express a subtle preference that States Parties not incorporate the crime into their domestic codes. (We discuss the negotiations surrounding these Understandings here).
If States Parties heed this call—which they should—the Court will inevitably be faced with situations in which there is incomplete concurrence between the prosecuting state’s domestic law and the ICC Statute, given that few states have codified the crime of aggression. (Our discussion of domestic codification is here). Under prevailing interpretations of the principle of complementarity (which focus on a defendant's conduct), however, a case would be admissible before the Court if a domestic court were prosecuting atrocity crimes, but not the crime of aggression.

I engage these issues in a new paper to be published in a special issue on this topic of the Journal of International Criminal Justice edited by Claus Kress (below right) and Philippa Webb (left).
The paper argues that the Prosecutor should announce in advance of the amendments’ activation the intention to stay his or her hand in the event that genuine domestic prosecutions are going forward on the basis of charges of

genocide, crimes against humanity, or war crimes, even if potential domestic aggression charges are not available under domestic law, are legally barred as by immunity doctrines, or are not forthcoming.
The only exception to this general approach should be in cases in which the crime of aggression is the primary or central charge to arise out of a particular situation, such that atrocity crimes are non-existent or largely peripheral.
This paper thus advocates that the ICC be allowed to exercise a de facto exclusivity over the crime of aggression vis-à-vis domestic courts, which will retain the ability to take the lead on prosecuting the atrocity crimes.
Such a division of labor between the ICC and domestic courts will: obviate a number of concerns associated with domestic prosecutions of the crime of aggression; encourage domestic prosecutions in keeping with the ideal of positive complementarity; reinforce the recognized duty of states to p 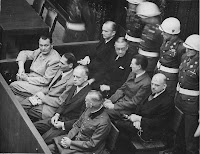 rosecute international crimes; and avoid over-burdening the ICC with cases that could otherwise proceed effectively in a domestic court. It will also ensure that to the extent that the crime of aggression is ever prosecuted, it is done not in a domestic but rather in an international forum, as was the case with the defendants in the dock at the Nuremberg Tribunal at right. Moreover, the prosecution should occur pursuant to a consensus definition of the crime and a negotiated jurisdictional regime.
The paper has been posted online here.