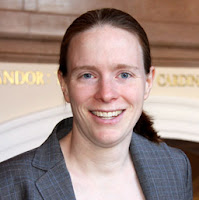 It's IntLawGrrls' great pleasure to welcome Jean Galbraith (left) as today's guest blogger.
As a Sharswood Fellow in Law and International Affairs at the University of Pennsylvania Law School, Jean teaches and has published in the areas of international law and foreign relations law.
She received her undergraduate degree summa cum laude from Harvard University and her J.D. from Berkeley Law (Boalt Hall). After law school, she clerked for Judge David S. Tatel at the U.S. Court of Appeals for the D.C. Circuit and Justice John Paul Stevens at the Supreme Court. Following her clerkships, she was an Associate Legal Officer at the International Criminal Tribunal for the former Yugoslavia, where she worked for Judge Theodor Meron.
In her guest post below, Jean presents a creative proposal to speed up the pace of U.S. treaty-making while at the same time enhancing the executive's credibility in treaty negotiating.