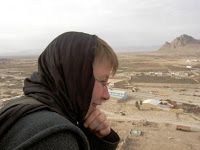 It's IntLawGrrls' great pleasure to welcome Dr. Sari Kouvo (far left) (credit) and Dr. Zoe Pearson (near left) as today's guest bloggers.
► Sari is co-director and co-founder of the Afghanistan Analysts Network, a Kabul-based nonprofit an independent policy research organization. Currently head of the Afghanistan Program of the International Center for Transitional Justice, she's a human rights lawyer with extensive knowledge of the Afghan justice system and human rights situation.
Sari earned her doctorate in international law from Gothenberg University in Sweden, and has held visiting fellowships at the NATO Defence College in Italy, Kent University in Britain, Åbo Academy in Finland, and Australian National University in Canberra. She worked from 2004 to 2006 as the Human Rights and Rule of Law Adviser to the European Union Special Representative for Afghanistan in Kabul, and also has been a researcher at Amnesty International.
► Zoe is a Lecturer in the Faculty of Law at England's Keele University, where she teaches courses in international law, European Union law, and human rights. Her research to date has considered the contribution of global civil society actors to the development of international law; current research and publications focus on space, pluralism and complexity in international legal regulation, and on feminist perspectives of international law.
Zoe earned her bachelor's and master's degrees in law from Waikato in New Zealand, and her Ph.D. from Australian National University in Canberra. In 2002, she was admitted as a Barrister and Solicitor of the High Court of New Zealand.
In their guest post below, Sari and Zoe provide a survey of a newly released collection of essays, which they edited, on the subject of feminism and international law.
Heartfelt welcome!
by Diane Marie Amann at 6:13 AM