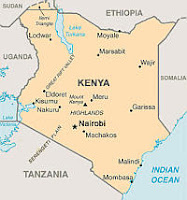 An additional update on the Kenya situation before the ICC is in order, given some developments earlier this summer. (See Jaya Ramji-Nogales's prior post on Kenyan preferences vis-a-vis the ICC here).
By way of background, the Pre-Trial Chamber (PTC) authorized the Prosecutor to commence a proprio motu investigation into the situation in Kenya on March 31, 2010. A year later, the Chamber issued arrest warrants against the so-called Ocampo 6: William Samoei Ruto, Henry Kiprono Kosgey, Joshua Arap Sang, Francis Kirimi Muthaura, Uhuru Muigai Kenyatta, and Mohammed Hussein Ali (pictured in the composite below left). In an effort to bolster its admissibility challenge and complementarity arguments, Kenya requested assistance from the ICC in its internal investigations pursuant to Article 93(10) of the ICC Statute, as we’ve previously discussed. This request was filed several weeks after the government launched an admissibility challenge to the opening of the investigation. Article 93(10) reads in part:

The Court may, upon request, cooperate with and provide assistance to a State Party conducting an investigation into or trial in respect of conduct which constitutes a crime within the jurisdiction of the Court or which constitutes a serious crime under the national law of the requesting State.

The operative rule, Rule 194, clarifies that requests can be transmitted to either the Prosecutor or to the Chamber concerned. In its request, Kenya sought copies of all statements and other evidence obtained by the Court and the Prosecutor in the course of the ICC investigations into the post-election violence. In particular, the cooperation request stated that the government intended to:

use the materials requested expeditiously to advance its national investigations into all allegations of Post-Election Violence, including those in respect of the six suspects who are presently before the ICC. 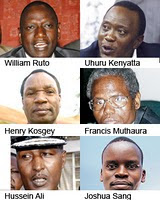 Incidentally, during this exchange, the defendants filed various views in the matter. The PTC ruled that the defendants lacked procedural standing with respect to these proceedings; accordingly, their filings, and the Prosecutor’s response thereto, were disregarded.
The government had asked that relief be granted on the cooperation request prior to the court’s ruling on the admissibility challenge. The PTC nonetheless ruled on the admissibility challenge this past May 30, and determined that there was no link between cooperation issues in Part IX of the Statute and the issue of admissibility in Part II. On the substance of Kenya’s challenge, the PTC welcomed Kenya’s express will to investigate post-election violence, but ultimately determined that Kenya had undertaken

no concrete steps showing ongoing investigations against the three suspects in the present case.

It rejected the government’s contention that it was enough that the government was investigating “persons at the same level in the hierarchy” of the defendants before the Court, even if this were in fact the case. Rather, the PTC ruled, it must be shown that the national authorities were investigating the same persons for the same conduct that were under investigation before the ICC. In advancing this hierarchy argument, the PTC wrote, the government erred in its briefs by drawing on the admissibility standard relevant at the time of determining whether to allow the opening of an investigation into a situation, which happens earlier than the current proceedings which involve a particular case. The PTC confirmed that the test of admissibility is more specific when one or more suspects have been identified. In sum, the PTC found that the Government’s submission mainly considered judicial reform actions and promises for future investigative activities—activities that, while welcome, were insufficient to render the cases inadmissible at this time. Given that admissibility must be determined "on the basis of the facts as they exist at the time of the proceedings concerning the admissibility challenge", the challenge must fail.
On June 29, the PTC ruled on the cooperation request. As a matter of statutory construction, it determined that it could not order the Prosecutor to provide any evidence in his possession. It could only provide materials already in the Chamber's possession, as where the material has been submitted to it by the Prosecutor through the process of disclosure. In addition, the PTC ruled that the requesting State Party must be able to show that it is conducting an investigation into conduct that constitutes “a crime within the jurisdiction of the Court or a serious crime under the national law of the requesting State” as provided by Rule 93(10). Not surprisingly given the prior admissibility ruling, the PTC concluded that the government's cooperation request was unsubstantiated and was thus denied.
These decisions are under appeal.
The admissibility discussion raises an interesting doctrinal point about what level of conc

urrence must exist between the substance and reach of domestic proceedings as compared to proceedings contemplated before the ICC. The PTC is operating under the same person/same conduct test that has never been expressly ratified by the Appeals Chamber (although the Chamber has had occasion to reject this test as well and it has not done so).
For our readers interested in the Kenya case in particular, I can highly recommend this blog, which is dedicated to the Kenya cases. The blog is the work of our colleague James Gathii (right), who is the Associate Dean for Research and Scholarship and the Governor George E. Pataki Professor of International Commercial Law at Albany Law School.