On June 28th, 2011, the International Criminal Tribunal for Rwanda referred a case to the Rwandan national court system under Rule 11bis for the first time in its history. (Rule 11 bis, central to the ad hoc tribunals' Completion Strategies, allows for pending cases to be referred to national courts, as we've discussed here). The ICTR press release is here; the decision of the referral chamber (under the presidency of Florence Rita Arrey of Cameroon, below right) is here.

Jean Uwinkindi (left), a former Pastor of the Pentecostal Church of Kayenzi, was arrested in Kampala, Uganda, on June 30th, 2010. He is accused of responsibility for attacks against Tutsi individuals seeking refuge at Kayenzi Church and elsewhere. His original 2001 indictment (slightly amended since) includes counts of genocide, conspiracy to commit genocide, and extermination as a crime against humanity. Even though Uwinkindi had been under indictment by the ICTR since 2001, two gacaca courts "prosecuted" him in 2009 in absentia; these verdicts were subsequently vacated, which has vitiated the defense's double jeopardy/ne bis in idem argument. Uwinkindi pled not guilty at his initial hearing.

As part of its Rewards for Justice initiative, the United States had offered a reward of up to $5 million for information leading to his arrest or conviction. It is unclear if this award has been paid to anyone in connection with Uwinkindi's capture and transfer. Ten other Rwandan individuals are still on 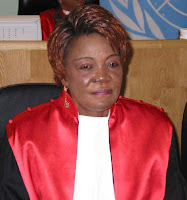 In allowing the referral, the Chamber noted that Rwanda had made "material changes" in its laws and had indicated its "capacity and willingness" to prosecute cases referred by the ICTR. In particular, the Chamber found that the Rwandan court system had addressed the issues that concerned previous Referral Chambers—namely the availability of witnesses and their protection. The ICTR Registrar appointed the African Commission on Human and Peoples’ Rights to monitor the trial in Rwanda and bring any potential concerns to the attention of the ICTR President. In its opinion, the Chamber emphasized its authority under Rule 11bis to revoke the case from Rwanda as a last resort. In rendering this decision, the Chamber benefited from the views of a number of amici: the Government of Rwanda, Human Rights Watch, the International Association of Democratic Lawyers, the International Criminal Defence Attorneys Association, and the Kigali Bar Association.

So far, only two other cases have been transferred to national jurisdictions, both to France. (See our prior coverage). In the past, the ICTR had consistently refused to refer cases to Rwanda, contributing to tensions between the Tribunal and the government. Over time, the impediments to such referrals (such as the possibility of the death penalty and life imprisonment in solitary confinement, concerns about the independence of the judiciary, and the lack of fair trial guarantees) were apparently adequately addressed by the Government of Rwanda. The issue of witness protection (particularly for defense witnesses who fear retribution) remained the final point of concern. Uwinkindi will challenge the ruling on appeal; his co-detainees have launched a hunger strike in support.

The Office of the Prosecutor will be filing applications to transfer 6 of the 9 outstanding cases (out of 93 indictments) to the national authorities. The OTP of the ICTR will retain potential jurisdiction over the final 3 fugitive defendants. The referral ruling may also clear the way for extraditions from other countries to Rwanda, most of which were rejected based on the prior reasoning of the ICTR. Stay tuned!
by Beth Van Schaack at 2:31 PM