Ante Gotovina (left), a defendant before the International Criminal Tribunal for the former Yugoslavia, recently filed his ICTY appeals brief. The case concerns the two-day Operation Storm, a Croatian offensive to reassert control over parts of the Serb-held Krajina (map below right), which had declared its independence from Croatia.
What exactly happened on those two days in August 1995 remains contested. It is clear that the lightning-fast operation coincided with a massive exodus of the Serbian population from the area four years after many of its Croatian inhabitants had themselves been pushed from the area by Serbian forces.
Was this a case of retaliatory ethnic cleansing and persecution, as alleged in the indictment and believed by some observers, or a natural response to armed conflict conditions and an evacuation order by the Serb leadership, as others have argued? The Operation also occasioned looting and plunder. But by whom: Soldiers under Gotovina’s command and control, civilians, or retreating Serbian forces? 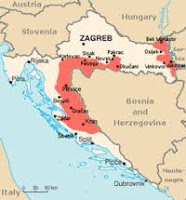 In a 1,500-page opinion issued on April 15 (available in two parts here) , the ICTY Trial Chamber sentenced Gotovina to 24 years for war crimes and crimes against humanity on a joint criminal enterprise theory of responsibility. (The Prosecutor also charged Gotovina under a superior responsibility theory. But the Trial Chamber made no findings in this regard and limited itself to the joint criminal enterprise ruling, even though Gotovina's alleged omissions were central to the case as discussed below).
In its Judgment, the Trial Chamber squarely adopted the ethnic-cleansing narrative. Indeed, the entire opinion is premised on a finding that Gotovina ordered a direct attack on civilians in the Krajina. The rest of the Judgment balances on this finding like an inverted pyramid.
This finding thus serves as the basis for the wanton-destruction war crimes charge. The crimes against humanity convictions rely on the indiscriminate attack as the predicate widespread/systematic attack against a civilian population. The attack also serves as a key actus reus for the persecution count and the other inhumane acts count. The attack is conceived of as one of the means by which the Croatian forces effectuated the deportation of the Serbian population (the other being the subsequent acts of plunder).

Finally, the attack serves as one of two “substantial contributions” made by the defendant to the apparent joint criminal enterprise. (The other was an omission; that is, the failure to take the necessary and reasonable measures to prevent and punish foreseeable crimes committed in connection with effectuating the joint criminal enterprise.)
Not surprisingly, the defendant’s 120-page brief challenges the Trial Chamber’s characterization of the attack as unlawfully directed against civilians.
The defense points out that the Trial Chamber concluded that almost 95% of the Croatian Army’s artillery rounds were aimed at military objectives. For the 5% that fell further from any military objective contained on the Croatian Army’s target list, Gotovina’s lawyers argued that the Trial Chamber failed to consider other reasonable explanations, such as
The defense argues that Gotovina did no more than engage military objectives on the front lines and within the Serb army’s operational depth. It concedes the mass departure of the Serbian population (photo at left above), but argues that based on the evidence presented at trial, a reasonable finder of fact could reach alternative explanations. For example, it argues that people:
Indeed, it seems that no Serb civilian actually testified that he or she left the Krajina in response to unlawful shelling. In short, the defendant has invoked the old saw that correlation is not the equivalent of causation.
Virtually invisible within the opinion is the role played by the United States in Operation Storm. It has been alleged that the U.S. trained and provided intelligence, strategic and potentially other forms of support to Croatian troops involved in the Operation, which proved to be decisive in the conflict against the Serbs in the former Yugoslavia and contributed to Milosevic’s eventual capitulation. (For elaborate accounts of U.S. involvement, see here and here). It does seem unlikely that Gotovina would have ordered an attack on civilians given the amount of U.S. involvement and oversight in the operation.
More on the U.S. role in Operation Storm may come to light in a different courtroom. A private military contractor then called Military Professional Resources, Inc., and subsequently acquired by L-3 Communications, was hired to train and equip the Croatian military. The company is now subject to a class action lawsuit filed in Chicago in August 2010 (case number 10-cv-5197). (See story here and here). The suit, brought by Serbian refugees, alleges that MPRI enabled genocide and ethnic cleansing in the Krajina. Our colleague Anthony D’Amato of Northwestern University School of Law apparently serves as counsel for the plaintiffs. So far, no published opinion appears available, so stay tuned.