Ivory Coast and the ICC 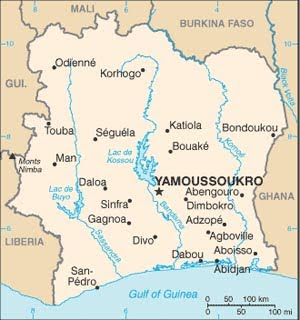 The New York Times this weekend had a small blurb on Côte d'Ivoire that will be of interest to ICC-watchers.
The Court's jurisdiction over Côte d'Ivoire dates from October 2003, when that country submitted an ad hoc declaration accepting the jurisdiction of the Court over crimes committed since September 19, 2002. (map credit) Although not explicitly stated, the Declaration relates to post-election violence committed in that country when ex-President Laurent Gbagbo (below right) refused to step down after losing to his rival, Allassane Ouattara.
This declaration is not a full-fledged ratification of the ICC Statute; rather it is made pursuant to Article 12(3), which allows an ad hoc acceptance of ICC jurisdiction over a "crime."
As ICC followers know, in general there are two preconditions to the Court's jurisdiction absent a Security Council referral: the crimes must have been committed either on the territory or by a national of a party to the Statute. Article 12(2) thus reads:

The Court may exercise its jurisdiction if one or more of the following States are Parties to this Statute or have accepted the jurisdiction of the Court in accordance with paragraph 3:
(a) The Territorial State;
(b) The Nationality State.


According to Article 12(3), however, parties may also accept jurisdiction over particular crimes on an ad hoc basis without becoming full members of the Court:

If the acceptance of a State which is not a Party to this Statute is required under paragraph 2, that State may, by declaration lodged with the Registrar, accept the exercise of jurisdiction by the Court with respect to the crime in question. 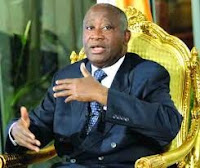 President Ouattara reaffirmed the original Declaration in a December 2010 letter.
On May 19, 2011, the ICC Prosecutor informed the President of the Court of his intention to submit a request to the Pre-Trial Chamber for authorization to open investigations into the situation in Ivory Coast. The Article 15 request itself was filed soon after. The situation has been assigned to Trial Chamber II.
Back to the Times article.
Apparently 12 individuals have been detained and charged, in the Ivoirian national system, with contributing to the post-election violence. Included in the defendants is Michel Gbagbo, the former President's son. The article states that it is expected that ex-President Gbagbo himself, and his wife, would also be charged.
If credible national prosecutions go forward, the Court should stay its hand pursuant to the principle of complementarity. Stay tuned.
To date, two Article 12(3) Declarations have been filed with the ICC Registrar pursuant to Article 12(3). The second, about which we've blogged before, comes form the Palestinian Authority, and it relates to crimes committed on Palestinian territory since July 2002.
For our prior coverage on Ivory Coast, see here and here.