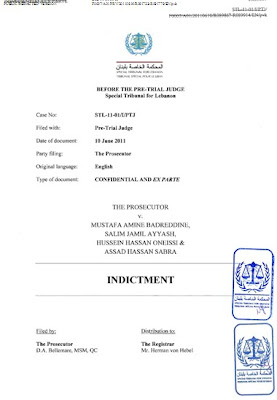 The indictment stemming from the 2005 assassination of Lebanon's ex-Prime Minister is now online.
Yesterday the Special Tribunal for Lebanon made public the formal charges that have been levied against 4 Lebanese men, all reputed to belong to Hezbollah (though that word does not appear in the published indictment) and to have participated in the crime.
The Beirut bombing that left former leader Rafik Hariri and a dozen others dead prompted a U.N. inquiry and eventual establishment of the Tribunal (prior posts). Efforts have stirred controversy and criticism, not the least because of the unusual secrecy within which this 21st C. mechanism has operated. (See, as one example, this November 2010 written account and video of a scathing Canadian Broadcasting Co. report.)
Numbering 47 pages in its English-language public version, the indictment in Case of Ayyash et al. (left) charges the 4 variously with counts of: conspiracy aiming at committing a terrorist act; committing a terrorist act by means of an explosive device; actual and attempted intentional homicide with premeditation by using explosive materials; and being an accomplice to these criminal activities.
As posted, just last week Prosecutor Daniel A. Bellemare, who had filed the sealed indictment with the Tribunal back in January, told an Ottawa audience that a "huge slice" of Lebanese society is undecided about the work of the Tribunal, and predicted that "the indictment will will make up their minds."
The unsealing order now makes public much circumstantial evidence to be adduced against the 4, Bellemare's official statement yesterday pointed to publication of the indictment as an important step down a road that will conclude with the end of trial:

'This Order will finally inform the public and the victims about the facts alleged in the indictment regarding the commission of the crime that led to charging the four accused. This unsealing of the indictment answers many questions about the 14 February 2005 attack. The full story will however only unfold in the courtroom, where an open, public, fair and transparent trial will render a final verdict.'


It remains to be seen whether that verdict will be returned with the accused in court (Bellemare, Tribunal President Antonio Cassese, and Hariri's son all have insisted that the 4 be handed over for trial) or in absentia, as the Tribunal Statute permits.