The man in the cage box 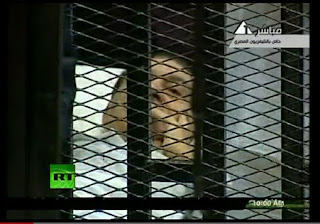 A scant 8 months after masses thronged to Tahrir Square and its counterparts throughout Egypt, the leader who's ouster they demanded is standing trial.
"Stand" is but a metaphor in this instance.
Former President Hosni Mubarak lay flat on a hospital bed yesterday as a prosecutor read the lengthy indictment against him aloud to the 3-judge panel and others present in a Cairo courtroom. The gurney had been wheeled into a cage box (image credit), the mesh-and-bars prisoners' dock from which Mubarak, 2 sons, and a handful of other codefendants seem destined to witness the proceedings against them.
Prosecutors have lodged multiple charges, relating to violence and corruption, against the 83-year-old Mubarak. Some carry the death penalty; for example, charges that Mubarak ordered troops to fire lethal rounds upon demonstrators. Hundreds died during the weeks that marked what's variously called North African People Power or the Arab Spring -- an ongoing phenomenon about which IntLawGrrls frequently have posted.
As occurred 1st in Tunisia, protests eventually eroded Presidential authority so much that Egypt's longtime strongman stepped down.
Efforts to form a new and democratic government have proved difficult and promise to be protracted. And yet, now, Egypt is having its national accountability moment.
The spectacle reportedly touched off strong emotions on all sides. CNN quoted Egyptian journalist Mona Eltahawy (below right) (prior post):

Every dictator in the region is watching this in total fear, thinking he could be next. And all the citizens in the region, ordinary people in the Arab or Middle East or North Africa, are thinking 'we wish we could put our tyrants on trial.'

(Tunisia already did so. In June ousted President Zine al-Abidine Ben Ali and his wife were convicted in absentia of embezzlement and misuse of public funds and given 35-year sentences; they are not in jail, however, having found safe haven in Saudi Arabia.)
A National Public Radio report yesterday noted that some in Egypt still support Mubarak, and suggested that many who don't prefer that he receive capital punishment. More complex feelings were relayed by a young man who said, in paraphrase:

I am personally against executions. But he deserves it.

The outcome of the trial against Mubarak, which adjourned till next week, of course remains uncertain. So too the political future of Egypt itself.