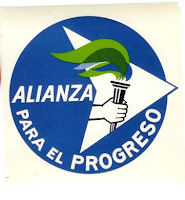 On this day in ...
... 1961 (50 years ago today), a special meeting of the Inter-American Economic and Social Council at Punta del Este, Uruguay, which had begun almost 2 weeks earlier, concluded. On this day all members of the Organization of American states except Cuba signed the Charter of Punta del Este. The charter established the Alliance for Progress/Alianza para el Progreso. (image credit) It aimed to improve economic development in the Americas but which by the 1970s "was widely viewed as a failure."