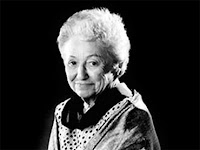 ... 2009, Rose Director Friedman died in her late 90s at her home in Davis, California. She'd been born in what is now Ukraine but in her infancy came with her family to Oregon. She earned her bachelor's degree in economics from Reed College and then began graduate studies at the University of Chicago, where she completed all but her Ph.D. dissertation in economics. At Chicago she met Milton Friedman. In 1976 he would win the Nobel Prize in Economics solo; nevertheless, at the death of Rose Friedman (right) obituaries underscored the importance of her collaboration with him. It included coauthorship of 4 books, among them Capitalism and Freedom (1962) and Free to Choose (1980). The latter, according to one obituary, became a public television series and "contributed to the intellectual foundations of the Reagan administration and of Republican congressional majorities in the 1990s." (photo credit)