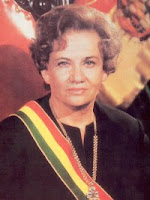 On this day in ...
... 1921 (90 years ago today), Lidia Gueiler (left) was born in Cochabamba, Bolivia. Having studied to become an accountant, she joined a left-wing party in her 20s; under its banner, in 1956 she became the 1st woman elected to Bolivia's Congress. Exiled 4 years later following a military takeover, Gueiler did not return to her country till 1979. That year she was elected President of the lower house of Congress. Amid political unrest when the 1979 Presidential elections failed to produce a clear winner, on November 16, 1979, Gueiler was made provisional leader -- the 1st and only woman President of Bolivia and the 2d in Latin America. (photo credit) On July 17 of the next year, before a new round of elections could be held, a general ousted her in a military coup. (He is now serving a sentence in Bolivia for human rights violations.) Following another 2 years' exile, Gueiler, who'd been involved in Bolivian feminist organizations throughout her life, served her country as an ambassador to Colombia, to West Germany, and to Venezuela. She died in La Paz on May 9 of this year.