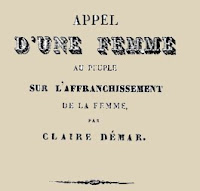 ... 1833, Claire Démar died in her mid-30s in Paris, France. Little is known about the early life of Démar, who signed letters with the name "Émilie d’Eymard." What is known is that she was "one of the most pugnacious" women among the utopian Saint-Simonists, and a contributor to periodicals like La Femme libre. She espoused ideas that subsequently would be called feminist. In 1833, Démar published Appel d’une femme au peuple sur l’affranchissement de la femme (A Woman's Call to the People for the Enfranchisement of Women), which labeled marriage legal prostitution and further demanded that the French Declaration of the Rights of Man be applied to women. (image credit) The same year, she committed suicide alongside the man who was her lover.