'Having concluded four cases and introduced four cases, the Court entered 2011 with the same number of cases on its docket as the year before -- sixteen.'


So stated our colleague Jacob Katz Cogan, Professor of Law at the University of Cincinnati, toward the end of his "The 2010 Judicial Activity of the International Court of Justice," published in the just-released edition of the American Journal of International Law. (His succinct summary is particularly useful for anyone who's prepping a Public International Law course this semester.)
Jacob's article reviewed key decisions like Pulp Mills, Diallo, Kosovo, and Jurisdictional Immunities; previewed what was to come in this year; and flagged key aspects of the fall 2010

addresses that ICJ President Hisashi Owada (right) delivered to various U.N. entities.
Among Jacob's bottom lines respecting the Hague-based Court (credit for above left photo):
► Expert witnesses and scientific evidence present issues yet to be resolved.
► ICJ judges appear not overfond of reservations to treaty clauses that provide for ICJ jurisdiction over disputes.

► The relation of the corporation to its human officers remains unsettled notwithstanding the Court's 1970 judgment in Barcelona Traction. 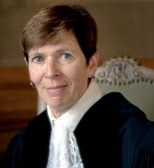 ► The insertion of nonstate actors' issues via advisory opinions is a tricky wicket.
► In Jacob's words, "minimalism" may be "an emerging characteristic of the current Court"; whether it takes hold depends in some part on the ICJ's 2 newest members, Joan E. Donoghue (bottom right) and Xue Hanqin (middle right).