Organized crime menaces Central America.
That was the takeaway from a noteworthy session of the Ottawa global criminal justice conference about which we've posted here, here, and here.
Speaking at the Spanish-language session were Dr. Claudia Paz y Paz Bailey (right), the Attorney General of Guatemala about whom IntLawGrrl Naomi Roht-Arriaza recently posted, and her counterparts in El Salvador and Honduras -- respectively, Romeo Benjamin Barahona Meléndez and Luis Alberto Rubí. (photo credit)
All 3 drew a direct link between the region's increase in violence and the increase in organized criminal activity -- extortion, as well as trafficking in drugs, humans, and weapons. Underscored was the vast capacity of organized crime to "penetrate," as Paz put it, legitimate sectors of activity such as the justice system, the banking industry, and police forces. Rubí added:

'I am going to say it. I have a problem with the police, with the judicial power.'


Without change in those sectors, he indicated, the fight against crime could not be won.
All 3 Attorneys General stressed that organized networks operate regionally -- that criminals recognize no national borders. 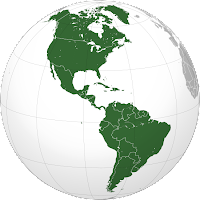 Indeed, the 3 spoke of concerns beyond the immediate Central American region. Paz said:

'The problem affects all the Americas.'


(map credit) Rubí laid some of the blame at the door of the United States. A U.S. policy of deporting gang members born in Central American countries spurred "a new level of organization and criminal expertise," he said, for which criminal justice systems in those countries were not prepared. (Coincidentally, Al Jazeera English is running an on-location series of items, available here, on these issues.)
Not surprisingly, all 3 prosecutors emphasized the importance of strengthening inter-state law enforcement. How to do so was open to some question. Asked Paz, in rhetorical fashion:


Paz also called for a "structural" response -- attention to the fate of young people who are drawn into crime. And she welcomed "political support"; in particular, the support of the Commission Against Impunity in Guatemala. Known by its Spanish acronym, CICIG, this U.N.-sponsored initiative was represented at the Ottawa session by Commissioner Francisco Dall'Anese. He too spoke of crime's "structures" -- a CICIG focus in the course of its efforts to help to bolster the capacity of Guatemala's prosecutors in the wake of years of civil unrest.