We are pleased to announce the recent release by Hart Publishing of a volume that we co-edited.
Entitled Feminist Perspectives on Contemporary International Law: Between Resistance and Compliance (2011), the book takes stock of where feminist perspectives on international law are today vis-à-vis women of the world and mainstream international law and politics.
The volume brings together contributors by established feminist international law scholars, including IntLawGrrls guest/alumna Hilary Charlesworth, as well as Dianne Otto, Julie Mertus, and Vasuki Nesiah. Also included are newcomers such as Maria Grahn-Farley and Yoriko Otomo.
The volume is a result of: 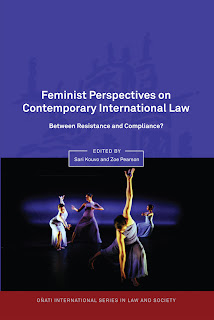 ► Discussions between us, the co-editors, and, then,
► A workshop at the International Institute for the Sociology of Law in Spain, at which all the authors discussed feminism's narrative about international law and feminist responses to the global politics of crisis.
Both of us co-editors have had the opportunity to be part of and follow the development of feminist international legal scholarship. We traced its self-assured beginnings in the 1990s, when feminism presented itself as an alternative to the patriarchal origins and male-dominated institutions of international law. And we've followed its post-9/11 crisis: feminist legal scholars have increasingly been asked who they claim to be speaking for and, after the extensive use of a rhetoric of 'liberation of Afghan women' following the US intervention in Afghanistan, they have been asked what they have ended up legitimizing.
The debates at the workshop also reflected the feminist positioning 'between resistance and compliance' -- or, as an Indian colleague at the workshop noted:

'For you [Westerners] the 1990s is the decade for feminist internationalism, for me it is the decade when I saw the space of local women's NGOs shrink with the influx of INGOs in India'.


What we then attempted to do with the volume is:
► First, to build on previous publication, such as Dorinda G. Dallmeyer's edited volume 'Reconceiving Reality: Women and International Law (1993), Hilary Charlesworth's and Christine Chinkin's The Boundaries of International Law: A Feminist Analysis (2000), and International Law: Modern Feminist Approaches (2005), edited by Ambreena Manji and IntLawGrrls guest/alumna Doris Buss.
► Second, to encourage critical reflections about contemporary international law issues, including those relating to international terrorism, global monetary institutions, organized crime and human trafficking, transitional justice and the role of international civil society.
► Third, with commitment to feminism as a politics, to call for connections between the local, national, and international -- and for action. As part of this, participants at the workshop were asked to write postcards to the future, and some of these are included in the edited volume. Some of the messages were:

In the future we have finally learned to listen and read across and over the disciplinary boundaries.

In the future I wish that women from all societies [are] able to make choices from a wide range of genuine and valuable options and to have those choices respected and protected by law.

Embrace radical diversity and a profound openness to fluidity, be aware that the hegemon will resist [...] but never lose heart!

Never underestimate the value of confusion.

More information about our book is here. To comment or learn more our scholarship and upcoming projects, contact Sari at sari@afghanistan-analysts.net; Zoe, at z.pearson@law.keele.ac.uk.