The Military Commissions are ramping up again with the referral of charges against a Saudi detainee, Abd al-Rahim Hussein Muhammed Abdu Al-Nashiri. (The Press Release is here). His arraignment will occur within 30 days.
By way of background, the charges specified concern actual and attempted attacks on three vessels (the so-called "boats operation"): 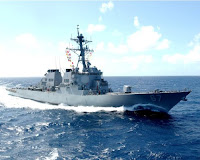 The photo at left is of USS Cole and comes from a website dedicated to the memorial to the victims of the attack. 17 U.S. service members died and dozens were injured in the attack. The Aegis class destroyer was almost destroyed; since repaired, it now sails out of Norfolk, Virginia.
Nashiri was captured in the United Arab Emirates in November 2002 and held in CIA "black sites." There, he was waterboarded, his family was threatened, and handguns and a power drill were employed as threats during interrogations. This treatment is conceded in the CIA's Office of Inspector General report of May 2004 (see, e.g., para. 22); the videotapes of his interrogations, however, were destroyed by the CIA.
In September 2006, he was transferred to Guantánamo. A December 2006 assessment identified him as a highly skilled operations coordinator who reported directly to Osama bin Laden, met regularly with other high-ranking Qaida operatives such as Khalid Shaikh Muhammed, and conceived and planned numerous plots against U.S. interests. He was considered a high threat with high intelligence value.
Earlier charges against him were dropped in 2009, when the Obama administration took office and revisited the original military commission scheme. In April, it was clear that Nashiri would be one of the first individuals to be prosecuted by the Obama Administration before the new commissions.
For his involvement in the boats operation, Nashiri has been charged with
The conspiracy charge includes allegations that Nashiri met with Osama bin Laden and others in 1997-2001 to plan the operation. The perfidy specifications relate that Nashiri invited the confidence and belief of one or more persons aboard USS Cole that two men dressed in civilian clothing and operating a civilian boat were entitled to protection under the law of war, and--intending to betray and make use of that confidence and belief--did thereafter detonate explosives hidden on the boat alongside USS Cole. All this was allegedly done "in the context of and associated with hostilities."
Given his mistreatment while in CIA custody, his defense counsel have asked that the death penalty be "off the table." They argued in a July 2011 Memorandum to the Convening Authority:

“The United States should not be permitted to kill a man it has brutally tortured and subjected to cruel, inhuman and degrading treatment.”

His lawyers, who will be paid by the Pentagon, have also argued that the military commissions do not have the procedural protections necessary for a capital case. None of the six other individuals prosecuted by military commission faced capital charges, so Nashiri would be the first.
Another interesting angle to the case is the question of whether a state of war or armed conflict existed between Al Qaeda and the United States at the time of the first two bombings. In 2000, the Cole attack was treated as a terrorism crime, and the FBI conducted the original investigations. The Supreme Court determined in Hamdan that at least as early as October 2011, the United States became involved in a non-international armed conflict. Justice Thomas, however, argued in dissent that this conflict began as early as 1996 when Osama bin Laden issued his fatwa against the United States. This condition precendent is vital, because the military commissions only have jurisdiction over violations of the law of war and the law of war only applies in the context of armed conflicts. The Military Commission Act thus requires at Sec. 950p(c) that:

An offense specific in this sub-chapter is triable by miltiary commission ... only of the offense is committed in the context of and associated with hostilities.

Nashiri's charge sheet and other documentation on the case can be found here. Stay tuned!
by Beth Van Schaack at 4:48 PM