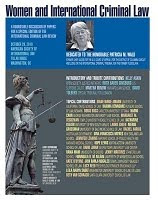 definition of "sexual violence" by the Trial Chamber of the International Criminal Tribunal for Rwanda in Prosecutor v Akayesu (1998) to the recent articulation of the elements of "sexual assault" by the Trial Chamber (right) of the International Criminal Tribunal for the former Yugoslavia in Prosecutor v Milutinović et al (2009) (currently on appeal as Prosecutor v Šainović et al). (photo credit)
The Rome Statute of the International Criminal Court and the ICC's Elements of Crimes take a slightly different approach to defining the crime of "sexual violence".
The result of the cross-fertilisation of sources has been the emergence in recent years of a spectrum or 'genus' of sexual crimes, referred to as "sexual assault" or "sexual violence".
The Milutinović Trial Chamber expressly found that sexual assault is

an offence that may include rape.

This is a significant development because it conceptualises sexual assault not as a residual category of offences falling short of actual penetration, but as an integrated class of offences including rape.
What also becomes clear from the overview is a conceptual split between definitions focusing on the non-consent of the victim and definitions focusing on coercion. Following the lead of the ICTR Appeals Chamber in Prosecutor v Gacumbitsi (2006), the Milutinović Trial Chamber attempted to bridge the divide by effectively conflating the concepts of coercion and consent in holding that "the disparity is of a formal nature only".
My article challenges that theoretical reconciliation.

It draws on earlier rape-focused writings of Tilburg Law Professor Anne-Marie de Brouwer (left) and other academics to argue that the question of consent is rendered irrelevant in the context of international sexual crimes, given that the prosecution must establish at the outset the chapeau elements of war crimes, crimes against humanity, or genocide, all of which involve inherent coercion.
As foreshadowed by Antonio Cassese and others, conceptual difficulties have arisen from the uncritical translation of domestic criminal law ideas of consent into international criminal law without full consideration of the particular significance of wartime circumstances.
My articles sets out case examples of sexual assault not involving penetration in order to show that, in reality, sexual crimes committed in the context of armed conflict are crimes of violence and should be treated as such to avoid disempowering victims.
It is suggested that the element of coercion, with consent as a defence only, is the preferable test to use in order to achieve a principled and progressive conceptualisation of all international crimes within the sexual violence spectrum. The risk arising from this existing jurisprudence is that judges of the ICC will deviate from the more principled focus on coercion in the ICC foundation documents, and will attempt to embrace, in a single test, concepts which do not sit well together. Future developments in this space, including any judicial interpretation of the distinction by the ICC, will determine what path will ultimately be followed in framing the elements of sexual violence crimes.