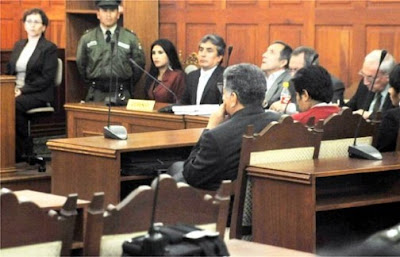 This week courts in Bolivia have sentenced 5 generals to prison terms of 10 to 15 years for firing on unarmed protesters during the country’s 2003 “Gas War.”
The protesters, including now-President Evo Morales, were outraged by the former government’s plan to export natural gas to Chile at bargain-basement prices. Troops under the command of Roberto Claros, the armed forces chief during the crackdown, and Juan Veliz, the army commander, gave orders to attack the demonstrators, arguing that they were blockading the roads into La Paz . Sixty-four people were killed and over 400 wounded.
At a sentencing hearing this week, 2 former government ministers were also sentenced, to 3-year terms for “complicity.” (credit for Sur Correo Agencia photo above of the hearing)
The charges against the defendants were styled as “genocidio,” but the longstanding definition of genocide in Bolivian law differs from the international definition. It includes the category of “masacres sangrientas,” or “bloody massacres,” and does not require any showing of intent to destroy a specific group; it has been used previously to convict in cases involving the extrajudicial killing of several trade unionists, for example.
President Morales came to power in 2005 largely as a result of revulsion against the tactics of the former government, both in privatizing the country’s resources and in using force against demonstrators. Bolivia’s 1st indigenous president, Morales vowed to empower the indigenous majority and make the institutions of the state more responsive to their needs.

Ironically, Morales has been forced to rely on natural resources extraction to finance expansive social programs; doing so has brought him into conflict with his indigenous base. Indeed, as the verdict was announced, a march from the Amazon to La Paz of indigenous groups protesting the construction of a highway through indigenous territory was under way. (credit for anti-highway poster at left)
Charges had also been brought against former President Gonzalo Sánchez de Lozada and his foreign minister in the massacre. However, both men reside in the United States, and the U.S. government has refused to extradite them.
A civil suit captioned Mamani v. Sánchez de Lozada, brought in the U.S. District Court for the Southern District of Florida under the Alien Tort Statute, is pending for these same events against both the ex-President and the ex-minister. The defendants hired expensive lawyers (including Alan Dershowitz and Jack Goldsmith), and filed a motion to dismiss the case on grounds of political question, and immunity, arguing as well that “disproportionate use of force” was not a clearly defined violation of the law of nations. In a 2009 decision, District Judge Adalberto J 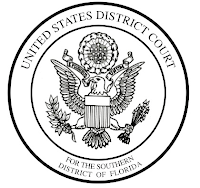 ordan denied the motion to dismiss, ruling that:
► The political question doctrine is inapplicable;
► Immunity has been waived by the Bolivian government (and the waiver accepted by the United States); and
► The violations arguably involved extrajudicial killing and crimes against humanity.
An appeal on these issues to the U.S. Court of Appeals for the 11th Circuit (to which Judge Jordan since has been nominated) is pending.


(News below in another accountability case involving Latin America)