(Delighted to welcome back alumna Anna Spain, who contributes this guest post)
International dispute resolution has evolved in response to crises. It emerged in response to the international community’s need to prevent inter-state conflict by providing states with peaceful alternatives to war for addressing their differences. 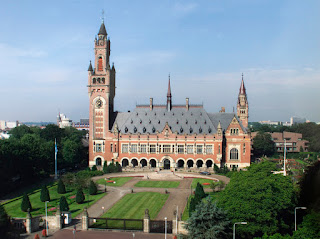 From the establishment of the Permanent Court of Arbitration in 1899 to the creation of the International Court of Justice in 1945, adjudication, through arbitration and judicial settlement, has formed the foundation of the international dispute resolution system. (credit for photo of Peace Palace, headquarters of both the PCA and the ICJ) The proliferation of courts and tribunals in recent decades further underscores this point.
While adjudication works well as a means to settle legal disputes between states that arise under international law, it is not as effective at resolving complex disputes over shared resources that involve non-state actors and fundamental human interests. Furthermore, adjudication promotes a win-lose paradigm. Whether by judges or arbitrators, matters are decided in favor of and against participating parties.
Given the the need to promote cooperation in order to address global crises facing the world today, it is time to rethink this paradigm.
One of the most pressing global crises is climate change (credit for photo below right), a subject on which IntLawGrrls frequently have posted. This past July, U.N. Secretary-General Ban Ki-moon said:

'We must make no mistake…[t]he facts are clear: climate change is real

In my article, "Beyond Adjudication: Resolving International Resource Disputes in an Era of Climate Change," published this year in the Stanford Environmental Law Journal, I argue that climate change demands new ways of understanding our approaches to resolving international disputes. Combating the threats caused by climate change requires unprecedented global cooperation. This is why the win-lose paradigm by which we understand international disputes and address them must also change.
I explore this challenge in two parts, as follows:

Effectiveness of adjudication
First, I evaluate the effectiveness of adjudication as a method for dispute resolution by identifying its limits. These limitations are particularly salient for complex, multi-party disputes involving interests in addition to rights.
Using the case of international resource disputes, I identify two types of deficiencies – those relating to the lack of adequate legal sources and those arising from the limitations of adjudication as a process. After analyzing the treatment of international resource disputes at the International Court of Justice, the Permanent Court of Arbitration, the International Tribunal for the Law of the Sea, the World Trade Organization, and the International Centre for the Settlement of Investment Disputes, I identify four categories of adjudication limitation. In turn, the categories refer to cases where:
► The parties refused to submit their dispute to adjudication;
► The adjudicatory decision did not satisfactorily address the merits of the dispute;
► There was noncompliance; and
► Despite the fact that the adjudication process was followed, the dispute or conflict recurred.