(Delighted to welcome back alumna Alexandra Huneeus, who contributes this guest post, which describes the argument of her article "Courts Resisting Courts: Lessons from the Inter-American Court’s Struggle to Enforce Human Rights," forthcoming in the Cornell International Law Journal) 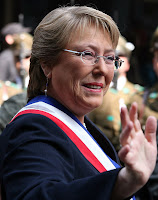 When the Inter-American Court of Human Rights ruled against Chile in Almonacid v Chile (2006), then-President Michelle Bachelet (left) vowed to comply. (credit for 2009 photo) The ruling ordered Chile:
► To investigate the extrajudicial killing of Luis Almonacid in 1973, and
► More ambitiously, to prosecute all cases of Pinochet-era human rights violations that had been closed under the 1978 Amnesty Decree. Bachelet (prior posts), herself a victim of the Pinochet regime’s repressive policies, declared:

'My duty as President is to make sure Chile follows the rulings of the Inter-American Court of Human Rights.'

But she was powerless to implement the order.
The Court’s innovative remedies required judicial as well as executive action. Two days after Bachelet’s declaration, the President of the Chilean Supreme Court stated in a press conference that the Inter-American Court’s ruling was not binding. Bachelet’s term ended over a year ago, and the Chilean judiciary has yet to prosecute a case closed under the amnesty.
Almonacid, then, represents the defeat of an international court order at the hand of a national court.
The Inter-American Court, based in Costa Rica, was rebuffed by Chile’s weakest branch. What’s more, this is business as usual in the Americas. Scholars of international relations assume that autonomous national courts heighten compliance with international human rights regimes. But the Inter-American Court’s ongoing experiments with innovative equitable remedies provide a different perspective.
As detailed in my forthcoming article, my examination of the Court’s docket – based on original data – reveals two dynamics:

► First, in a majority of its contentious rulings the Inter-American Court demands that some sort of prosecutorial or judicial action be taken, such as an investigation, a hearing, or a trial.
► Second, the judges and prosecutors of Latin America rarely comply.
Latin American constitutions grant prosecutors autonomy from the executive, much like that of judges, to ensure accountability. But judges and prosecutors are far less likely to undertake the actions demanded by Inter-American Court rulings than are executives. While states implement the majority of orders that primarily require executive action, they implement only one in ten orders that invoke action by justice systems.
Some have argued that the reason for non-implementation of court orders is that criminal prosecution of state-sponsored crime is “costly” or “difficult” to undertake. (See, for example, Darren Hawkins and Wade Jacoby, here.) Others have reasoned that the government as a whole lacks “political will.” (See, for example, James L. Cavallaro and Stephanie Erin Brewer, here; Christina M. Cerna, here; and Morse H. Tan, here.)
Nor is the problem a lack of judicial independence.
My article draws on original data to reveal a different – and often primary – reason. Implementation of orders involves actors whose interests, ideologies, and institutional settings differ from those of the executive. These non-executive actors may be only dimly aware of the Inter-American Court. Prosecutorial and judicial politics must be viewed as separate, vital factors in explaining the performance of supranational rights regimes and in devising strategies to enhance their effectiveness.
Drawing on this insight, my article also argues that the Inter-American Court – and international human rights courts more generally – could increase compliance by more directly engaging national judges and prosecutors. In short, human rights courts should deliberately cultivate national justice systems as partners in compliance.
The argument holds relevance beyond the Inter-American system.
Many supranational institutions find themselves conferring with the foreign ministry when it is other state actors who hold the key to their success. Judicial actors, in particular, can foster or flout supranational rights regimes; think back, for example, to the back-and-forth between the International Court of Justice and the U.S. Supreme Court regarding application of the Vienna Convention on Consular Relations. (Prior IntLawGrrls posts available here.)
Scholars have called for the International Criminal Court to proactively use the threat of ICC jurisdiction to press states parties to prosecute crimes committed in their territory. Like the Inter-American Court, whether the ICC has success in so doing will depend not only on the will of the executive, its formal interlocutor, but on the will and capacity of diverse justice system actors
The analysis is also relevant to the European and African regional human rights systems. While neither system has a remedial regime as intricately developed as that of the Inter-American system, motivating national justice systems to act – and to learn of and care about regional rights law – is important for both systems’ future success.
To explain compliance patterns to human rights regimes, then, we need to pry open the black box of domestic justice systems and examine the motives and institutional settings of judges and prosecutors.
And to achieve greater implementation, the Inter-American Court must make itself matter to local state actors beyond the foreign ministry. As Duke Law Professor Laurence Helfer has written here,

'[C]ompliance with international law increases when international institutions – including tribunals – can penetrate the surface of the state to interact with government decision-makers.'

One tool that the Inter-American Court has at hand is its self-styled remedial regime which, coupled with the Court’s supervision of compliance to its rulings, establishes a link between the Court and particular state actors. This link provides a unique opportunity, so far underutilized, to deepen relationships with actors beyond the executive and to shape those actors into compliance partners.
My article is the first to be published in an ongoing study of the Inter-American Court’s remedial regime in comparative perspective. It aims to straddle disciplines, speaking to debates in both political science and law.

by Alexandra Huneeus at 6:00 AM

Very interesting article. I would recommend you to follow the case of López Mendoza vs. Venezuela from the IACHR (2011). It is very recent and although the Court ordered the electoral authorities to allow Mr. López Mendoza to run for public office, it is very obvious that such authorities won't allow it since all the branches of government are under the direct command of Hugo Chávez. It is expected that in this case, the Supreme Court issues a ruling declaring unenforceable the decision from the IACHR. In other similar case, three years ago, the Supreme Court even requested the President to denounce the Inter-American Convention of Human Rights.