(Delighted to welcome back alumna Pamela Yates, who contributes this guest post marking today's opening of her film Granito: How to Nail a Dictator at the IFC Center in New York, with national release to follow)

It all started when I made When the Mountains Tremble in Guatemala in 1982.
The film was so critical of the ruling military junta that it took nearly 20 years before it could be shown for the first time in public at the University of San Carlos in Guatemala City. I had filmed all different aspects of Guatemala’s civil war in the 1980’s, and When the Mountains Tremble tells the story from a Maya perspective. The storyteller was a young Maya K’iche woman who had been forced into exile named Rigoberta Menchú (below left).
It was at that first public screening in 2003 that I learned that When the Mountains Tremble had actually been shown thousands of times clandestinely during the war; that nearly every gathering of those resisting the military dictatorship started out by showing the film or a part of the film. That people had made VHS copies from copies from copies until the image was barely visible and these c 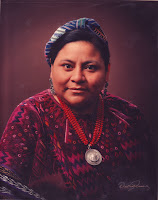 opies were carefully passed hand-to-hand since having a copy of the film was dangerous.
In the audience that night in 2003 sat international lawyer Susie Kemp (bottom right), who was part of the legal team working on the Guatemalan genocide case, a universal jurisdiction case in the Spanish National Court system, and a separate case within the Guatemalan domestic judicial system. Susie asked me if I had kept all of the filmed outtakes, and whether I could go back to look for filmed forensic evidence that could assist in bringing the perpetrators in the genocide case to justice. Two of the generals who’d been issued arrest warrants in the Spanish National Court Case were actually in my old film, General José Efraín Ríos Montt and General Lucas García.
I didn’t know if there would be the kind of images that Susie needed, because when I make a film, what I remember is what I put into the film, not what I took out.
My partner and Producer/Editor of When the Mountains Tremble drove to our storage vault in the middle of New Jersey’s industrial wasteland and brought back a dozens of dusty cardboard cartons. Thus began an archeological dig through quarter-century-old 16 mm film cans. What we found was so astounding that I began a new film, a film that would become, for me, the story of a lifetime.
The new film, Granito: How to Nail a Dictator, is part political thriller and part exploration of a strange intersection of law and art. It’s a story of dark deeds, juxtaposed with the inspiring power of collective action in a quest for justice. It’s the story of intertwined destinies, and a love letter to the next generation of human rights filmmakers.
"Granito," or tiny grain of sand, is a Maya concept that means that each person can make a small contribution to positive social change, and together we can make great changes in favor of justice and human rights. It reflects the communal values found in the Maya communities.
The Granito concept also permeates our filmmaking process. In that spirit, Peter Kinoy and I began a meticulous search through the filmed outtakes. It took about 5 months to find and transfer to the digital realm 7 hours of material we thought could be useful to the case. The most incriminating evidence would be shown to attorney Almudena Bernabeu (bottom, 2d from right), working out of the Center for Justice and Accountability, who by 2005 was the lead lawyer in the Spanish National Court case. She would decide whether to present it to the investigating judge, Magistrate Santiago Pedraz. No videographic material had ever been entered into evidence as part of a Spanish National Court case, so this could be precedent-setting.
This search for evidence made me realize how important all the documentation gathered by human rights lawyers and advocates had become over the years, and I decided to include their searches as part of the film Granito as well:
► Guatemalan forensic anthropologist Fredy Peccerelli’s exhumations and scientific examination of the remains of those killed during the Guatemalan genocide;
► The longterm search of Kate Doyle (bottom, 2d from left) through military documents leaked to her;
► The discovery of the secret archives of the Guatemalan National Police who are thought to be responsible for the disappearance of tens of thousands of political dissidents: and
► Almudena’s gathering of all the victims’ testimony which corroborated the state documents.
We gathered at the Spanish National Court to give our testimony and to authenticate our findings before Judge Pedraz in December 2009. 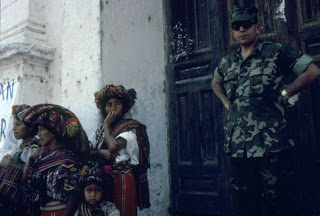 No film crew had ever been allowed in to film in the Spanish National Court, but after a lengthy negotiation, we were allowed to film it all. When my turn came to testify, I set up a large television monitor, commenting while playing selected footage -- the gruesome aftermath of a civilian massacre committed as part of the Guatemalan Army’s counterinsurgency campaign. The Army strategy articulated by a young colonel to defend the killing of civilians:


(Above right, 1982 photo by Jean-Marie Simon of military occupation in Guatemalan highlands)
But the more damning evidence came next, from an interview that I did with the President of Guatemala, General Rios Montt, at the height of his power.


Pamela: “ What would you say to the charges that the Army is massacring peasants in the highlands? Is there repression by the Army?
General Ríos Montt: “There is no repression on the part of the Army. Our strength is in our capacity to make command decisions. That’s the most important thing. The army is ready and able to act. Because if I can’t control the army then what am I doing here?


When I filmed When the Mountains Tremble in 1982 I thought if I could just bring the story of what was happening in Guatemala to the international audience, U.S foreign policy would change and support would be withdrawn. But nothing changed, and over the years, the question that has weighed heavily on me was, “Did I do enough to stop the violence in Guatemala?”
Perhaps I have been given a second chance. Adding my testimony, my granito, my tiny grain of sand, to the mounting evidence that would not only be used in the Spanish National Court case, but hopefully contribute to the tipping point for justice in Guatemala itself. Within the past 3 months (prior posts), more perpetrators have been arrested and convicted in Guatemala for crimes committed during the 1980s than in the past 30 years.
Sometimes life does give you a second chance. 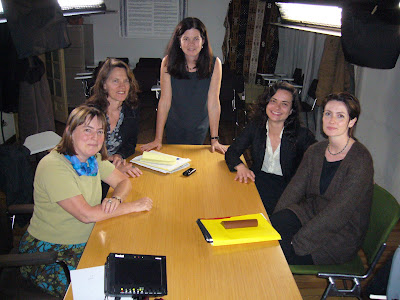 (The photo above depicts members of the legal team in the Guatemala genocide case being heard at the Spanish National Court; left to right, IntLawGrrl Naomi Roht-Arriaza, Kate Doyle, Pamela Yates, Almudena Bernabeu, and Susie Kemp. Watch the 2-minute trailer of Granito: How to Nail a Dictator, and read The New York Times feature article about Granito)