(Delighted to welcome back alumna Yaël Ronen, who contributes this post) 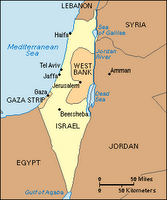 Rarely has the annual session of the UN General Assembly attracted public interest as it has this year, when attention is focused on the prospect of a Palestinian declaration of independence or application for UN membership. In this post, I would like to discuss the significance of such steps and their potential consequences.

Declaration of statehood
The Palestinian Authority, by itself or together with Hamas, fulfills the factual criteria for statehood at a credible level:
There is at least a core territory -- the Gaza Strip and areas within the West Bank -- in which a government exercises effective control over a population. (map credit) Moreover, any deficiencies in the effectiveness of government are likely to be mitigated by the right to self-determination of the Palestinian people, which has long been recognized internationally, including by Israel, the main opponent to Palestinian statehood at this time.
As I argued in an article published last year, what precludes the Palestinian Authority (the political entity operating in the West Bank) from being considered a state is merely the fact that it does not claim to be one. Consequently, if the Palestinian Authority does declare the establishment of a state of Palestine, recognition of such a state would, in principle, be neither premature nor in violation of any international legal norm.
Recognition of statehood is a separate matter from admission to the United Nations.
Recognition of new states is the prerogative of states. Nonetheless, admission of an entity as a member state of the United Nations creates a strong presumption in favor of that entity's statehood. Similarly, a resolution which ostensibly recognizes a new state can be regarded as the collection of numerous individual acts of recognition by states voting in favor of the resolution. It is in this way that UN processes and recognition of statehood may be linked.

Territorial issues
While new states rarely need to declare the extent of their territory, the future state of Palestine might have to tackle the matter head on, for two reasons, pulling in opposite directions:
► First, given the overwhelming consensus that the West Bank is under Israeli occupation, and the less widespread but still prevalent view that the Gaza Strip is also occupied, for a claim of effective government over territory to be credible, the Palestinians must indicate some core territory where they exercise effective control to the exclusion of Israel. They will have to concede that at least that part of the territory they claim is not occupied. Such concession is readily acceptable with respect to the Gaza Strip (although the Palestinian Authority might be hesitant to rely on Hamas to substantiate its status) or with respect to areas within the West Bank.
As noted earlier, I believe this proposition to be acceptable as regards statehood. It is discussed here in the context of its implications with respect to occupation.
► Second, the Palestinians will need to indicate any territory claimed by them as sovereign in which they do not exercise effective control, otherwise Palestine may be recognized in relation 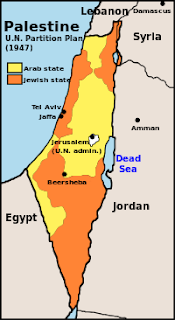 only to those areas which are under effective Palestinian control at the time of declaration, i.e. at most the West Bank and Gaza Strip (but not Jerusalem!). This would make any further territorial demand a matter for bilateral political negotiations with Israel, rather than a demand for the realization of a legal entitlement. It is therefore likely that any declaration of statehood will include some reference to a wide, as-yet unfulfilled territorial entitlement. However, a claim of sovereignty over territory beyond the West Bank and Gaza Strip (for example, over mandatory Palestine or over the Arab state's share under the 1947 partition plan (UN Resolution 181 (II)) (depicted at left (map credit)) would be more difficult for states to accept, because it would infringe on Israel's territorial integrity. The only exception would be with respect to Jerusalem, where Israeli sovereignty is contested, at least with respect to the Eastern part of the city.

Legal consequences of Palestinian statehood
The legal consequences of Palestinian statehood might not be as earth-shattering as might be expected.
► Statehood would put paid to any doubt as to the law governing the relations between Israel and the Palestinians. There will no longer be any doubt that territory remaining under Israeli effective control is occupied for the purpose of the Fourth Geneva Convention; nor, on the other hand, will there be doubt that the Palestinians are bound by the prohibition on the use of force, or that a right to self-defence accrues in the relations between them and Israel.
► Characterization of the conflict between Israel and the Palestinian as international will also cease to be an issue. Yet the significance of this clarity should not be overstated, given that the distinctions between international and non-international conflicts are diminishing, and the prevailing tendency to classify the conflict as international, illustrated in the Palmer Report, para 73, as well as in Israeli jurisprudence.

► Perhaps the most widely discussed consequence of Palestinian statehood concerns the jurisdiction of the International Criminal Court (right). (photo credit)
For almost three years, the ICC Prosecutor has been faced with a declaration by the Palestinian Authority, purporting to grant the ICC jurisdiction over crimes allegedly committed in the 'territory of Palestine' since 2002. The coming into existence of a state of Palestine will relieve the Prosecutor of the need to determine the admissibility of this declaration, since a state of Palestine would undoubtedly be entitled to grant the ICC jurisdiction with respect to crimes allegedly committed on its territory, either ad hoc or by acceding to the ICC Statute. Such jurisdiction can operate with retroactive effect (Articles 11(2) and 12(3) of the Rome Statute of the ICC), but it probably cannot extend to the period prior to the state’s existence.
Even prospectively, ICC jurisdiction may have far-reaching implications for Israel: in addition to exposing members of the Israeli military forces to investigation and prosecution for acts carried out in the West Bank and Gaza Strip, it will bring to the fore the entire settlement project, which prima facie constitutes a war crime under the ICC Statute, implicating not only the military but tens of thousands of civilians. There are numerous obstacles to prosecuting Israeli citizens for their involvement in the project, such as the non-customary character of the Statute's provision, the absence of required mens rea and more; but the very dealing with these questions may extract a high toll from Israel.
► A final consequence to consider is the status of the Interim Agreement, signed by Israel and the PLO in 1995, which prohibits unilateral measures to change the status of the West Bank and Gaza Strip. Although the Agreement was meant to expire in 1999, neither side has publicly denounced it, and both sides rely on it occasionally. A Palestinian declaration of stat

nds the PLO rather than the Palestinian Authority, although the latter entity is itself a product of the Agreement), but it would not detract from the validity of the Palestinian statehood.
There are those who point out that a declaration of statehood would entitle Israel to declare the Agreement terminated on the ground that there has been a material breach under Article 60 of the Vienna Convention on the Law of Treaties, thereby exempting it from obligations that it fulfills at present, such as the transfer of funds to the PA. (See here.) Israel would nonetheless remain bound by its obligations under the laws of armed conflict and international human rights law.

Conclusion
The legal ramifications of the anticipated steps by the Palestinians appear to be of limited scope. Palestinian statehood will not cause a legal earthquake. In contrast, commentators warn of the negative impact that such steps might have on the prospects of bringing the parties back to productive negotiations. The wisdom of any future action should therefore be assessed in light of these considerations, no less than in light of their legal consequences.