It's IntLawGrrls' great pleasure to welcome Dr. Emily Crawford (left) as today's guest blogger.
Emily is a post-doctoral fellow and associate at the Sydney Centre for International Law, a unit of the University of Sydney Law School in Australia. Emily completed her Arts and Law degrees at the University of New South Wales, worked as a researcher at the Australian Broadcasting Corporation, and then returned to the University of New South Wales to undertake her PhD. Emily's doctoral thesis, on the disparate treatment of participants in armed conflicts, was published as The Treatment of Combatants under the Law of Armed Conflict (Oxford University Press 2010).

She has taught and lectured on international law and international humanitarian law, and also helped to train military personnel on behalf of the Red Cross in Australia. Emily is a member both of the International Law Association’s Committee on Non-State Actors and of the New South Wales Red Cross International Humanitarian Law Committee.
In her guest post below, Emily discusses her paper entitled "Regulating the Irregular – International Humanitarian Law and the Question of Civilian Participation in Armed Conflicts." Her current research looks at major developments in the conduct of armed conflicts in the 21st century, such as cyberwarfare and targeted assassinations, and the implications for both domestic and international law.
Emily dedicates her post to Martha Gellhorn (1908-1998). As discussed in an IntLawGrrls post entitled "Women at Nuremberg: Press," Gellhorn (below left) (image credit) started as a fashion writer yet, during a brief marriage to novelist Ernest Hemingway, she shifted to what would be an acclaimed and lifelong career as a war correspondent. Emily writes of Gellhorn: 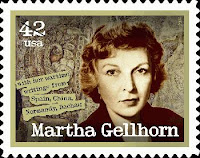 In a notoriously macho and chauvinist field such as war reporting, she never let her gender nor her age stand in her way, nor let others define her or limit her; she never subscribed to the truism that ‘the first casualty in war is the truth’; (and she was the only woman who ever walked out on Hemingway!).

Gellhorn joins IntLawGrrls' other foremothers in the list just below our "visiting from..." map at right.
Heartfelt welcome!