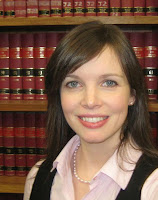 It's IntLawGrrls' great pleasure to welcome Katie O'Byrne (right) as today's guest blogger.
Having just completed a term as an associate to Justice Kenneth Hayne AC of the High Court of Australia, this academic year Katie is studying for her LLM at the University of Cambridge -- at Jesus College, as a David M Livingstone (Australia) Scholar. She graduated with a BA/LLB in 2009 from Monash University in Melbourne, Australia, with first class honours in Law.
Katie has spent time volunteering with refugee communities in Serbia, and worked as an assistant legal officer to the pre-trial chamber in the case of Prosecutor v Radovan Karadžić at the International Criminal Tribunal for the former Yugoslavia. She has practiced commercial law in Melbourne, in addition to undertaking pro bono and law reform work and coordinating a schools education program on international humanitarian law for the Australian Red Cross.
She has previously published in the area of gender perspectives on international humanitarian law. In her guest post below, Katie discusses her latest article, "Beyond Consent: Conceptualising Sexual Assault in International Criminal Law" (available at her personal website, here). Presented at the October roundtable cosponsored by IntLawGrrls and the American Society of International Law, the article was just published in the new special issue of the International Criminal Law Review on “Women and International Criminal Law”, dedicated to IntLawGrrls alumna Patricia M. Wald. Katie's post today is one of a series we've posted on the project.
Katie dedicates her post to Jessie Street (below center). (Prior post) Katie writes of Street:

She was one of Australia's most prominent feminists and something of a visionary in her work for peace and social justice. She campaigned courageously and untiringly for many important causes, from volunteering with prostitutes in London when she was very young, to promoting work rights and pay equity for women, to leading the 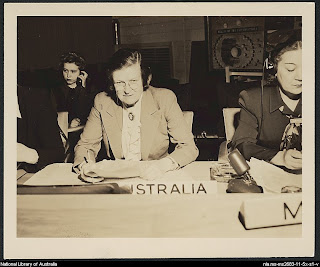 lobby for Indigenous reconciliation in Australia including drafting the amendments to the Constitution which passed in the 1967 referendum. In her extensive international work, she made a significant contribution as the only female adviser in the Australian delegation to the 1945 United Nations Conference on International Organization, where she assisted in negotiating the insertion of 'sex' into the clause 'without distinction as to race, sex, language or religion' wherever it appears in the United Nations Charter. She chaired many committees and was an executive member of the World Peace Council and the British Anti-Slavery Society. She is still a great inspiration who showed what Australian women can achieve.

(credit for above left National Library of Australia photo captioned "Jessie Street representing Australia at the United Nations") Today Street (1889-1970) joins other foremothers in IntLawGrrls' list just below our "visiting from..." map at right.