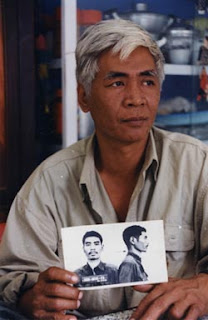 Sadly, the acclaimed Cambodian artist, Vann Nath, passed away on September 5, 2011. Nath was one of only 14 known survivors of the Khmer Rouge's infamous Tuol Sleng S-21 prison in Phnom Penh. Originally a sign painter from Battambang Province, Nath was forced to work on a collective farm when the Khmer Rouge seized power in 1975. Inexplicably arrested by the Khmer Rouge in 1978, he was taken to S-21 as an enemy of the regime. (Like all prisoners of S-21, Nath was dutifully photographed upon his arrival (left)). He was spared because his captors learned he could paint. While others around him were sent to the killing fields for execution, Nath was forced to paint endless portraits of Pol Pot. Later in life, he applied his talent to create brutal scenes depicting what life was like at Tuol Sleng.
Nath did not become a Civil Party in Case 001 brought against Duch (Kaing Kek Iev), the head of the prison, before the Extraordinary Chambers in the Courts of Cambodia. He chose instead to confront the defendant in the capacity as a witness. As Youk Chhang—the founder and director of the Documentation Center of Cambodia—explained,

He made this choice because he understood that his primary duty was to provide testimony for subsequent generations of Cambodians to learn from. This reflected a concept of justice that focuses on the future of humanity, rather than temporary individual desires for retribution, revenge or remuneration.

I met Nath at the Closing Arguments in the Duch case. Because he was not a Civil Party, he sat in the public gallery with the other observers, including hundreds of Cambodians who had been brought in from the countryside to witness this historic event. Although he himself was clearly moved by the proceedings, and at one point nearly collapsed from emotion, it was clear that Nath's presence also provided great comfort to others in the audience who heard—many for the first time—the details of the case against Duch. Later, he said he could "accept" the commuted sentence against Duch (shortened to reflect an unlawful pre-trial detention), which encouraged other victims to do the same.
Chhang further notes that Nath's passing highlights the importance of moving forward with the ECCC proceedings, as witnesses, victims, and perpetrators are all aging. Chhang's eulogy also notes the following:

The passing of Vann Nath before others responsible for the creation of Tuol Sleng S-21 prison are tried is a tragedy that highlights the high cost that the simple passage of time can inflict on the pursuit of justice. Sadly, this tragedy repeats itself silently throughout Cambodia, as each day victims of the Khmer Rouge pass away without having been provided any measure of justice. What is even more tragic is the fact that many of these deaths could be prevented if ordinary Cambodians had access to modern healthcare, making the world-class healthcare provided to the accused at the Tribunal appear unfair to many victims. It is hard to explain lofty, abstract goals such as promoting the “rule of law” to victims who cannot afford to even see a doctor.

Nevertheless, by providing medical care to the accused out of respect for fair trial and human rights principles, the Tribunal can present a counterpoint of compassion to the terror, torture and degradation Vann Nath and many others suffered at Tuol Sleng S-21 and other Khmer Rouge prisons throughout Cambodia. Although protecting the rights of former Khmer Rouge leaders can at times be a bitter pill to swallow, doing so, even when it is difficult or unpopular, provides a lesson for the future of which Vann Nath could be proud: that every human being has a right to dignity and equality under the law.

Vann Nath was a friend to many of us and will be missed by everyone at the Center and many others throughout the world. We will all miss, but draw inspiration from, the palpable sense of peace that emanated from within him.

Nath is the author of A Cambodian Prison Portrait: One Year in the Khmer Rouge’s S-21 Prison, the only first-hand account of life at Tuol Sleng. He will be missed.