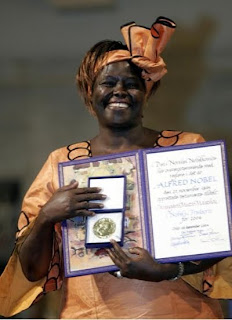 Dr. Wangari Maathai (left) succumbed Sunday to ovarian cancer at a hospital in Nairobi, Kenya.
She'd been born on April 1, 1940, in Nyeri, a foothills district in the same country.
After earning a biology degree as a scholarship student at a small college in Kansas, followed by a master's degree at the University of Pittsburgh, she went on to become the 1st woman in East or Central Africa to earn a Ph.D. -- in veterinary anatomy, from the University of Nairobi.
Maathai there served as a professor and department chair in the 1970s.
Toward the end of the same decade she founded the Green Belt Movement, which she founded in 1977. Its mission:

For her efforts Maathai, about whom we've posted on numerous occasions, was awarded the 2004 Nobel Peace Prize. (photo credit) She is the only African woman to have been so honored.
In her Nobel Lecture, Maathai said:

Activities that devastate the environment and societies continue unabated. Today we are faced with a challenge that calls for a shift in our thinking, so that humanity stops threatening its life-support system. We are called to assist the Earth to heal her wounds and in the process heal our own – indeed, to embrace the whole creation in all its diversity, beauty and wonder. This will happen if we see the need to revive our sense of belonging to a larger family of life, with which we have shared our evolutionary process.
In the course of history, there comes a time when humanity is called to shift to a new level of consciousness, to reach a higher moral ground. A time when we have to shed our fear and give hope to each other.
That time is now.

As this passage indicates, her efforts extended well beyond the narrowest confines of environmentalism. In one of her later public statements, she endorsed the work of the International Criminal Court, an international organization subjected to considerable scrutiny in Maathai's native Kenya.
Tributes to Maathai from world leaders, including Barack Obama, Mary Robinson, and Nelson Mandela, may be found here.