Two men were executed in the United States last night.
One, pronounced dead at 6:21 p.m. Texas time, had been convicted, Reuters reported, "of what some call the most notorious race crime of the post-Civil Rights era."
The second, pronounced dead at 11:08 p.m. Georgia time, had been convicted of killing a police officer in Savannah. His was a conviction that the state chose not to reverse despite innocence claims resulting in part from the recantation of multiple trial witnesses. His judicial remedies ended with this terse order of the U.S. Supreme Court, issued at 10:52 p.m.:

11A317 DAVIS, ANTHONY TROY V. HUMPHREY, WARDEN
The application for stay of execution of sentence of death presented to Justice Thomas and by him referred to the Court is denied.

Yesterday's events constituted the 11th execution in Texas, and the 3d in Georgia, since the beginning of 2011.
By this count, the two men were the 1,268th and 1,269th persons to be executed in the United States since a de facto moratorium established by the Court's ruling in Furman v. Georgia (1972) ended with its ruling in Gregg v. Georgia (1976).
The executions came just days after two who've served on that Court voiced concerns about the death penalty in America. 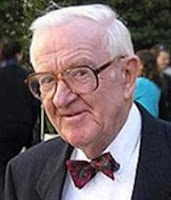 Retired Justice John Paul Stevens spoke about innocence at last week's Washington, D.C., gathering of the American Bar Association Death Penalty Representation Project.
Although he himself never represented a death row client, Stevens (right) made clear his pride in having succeeded as a young lawyer in persuading the Illinois Supreme Court to set aside a murder conviction secured by means of a coerced confession.
As reported by Tony Mauro at the Blog of Legal Times, Stevens singled out for criticism the Supreme Court's March 2011 denial of compensation for a man wrongly held on death row for 14 years in Louisiana. Connick v. Thompson issued less than a year after the Justice's retirement from the high bench. Stevens called "'off the wall'" and "'obviously unwise'" the decision to require a plaintiff like Thompson to prove that his injury was caused by a governmental policy, and not simply a single incident of harm.
The critique demonstrated Stevens's continuing concerns about the death penalty -- concerns made especially explicit in his 2008 opinion in Baze v. Rees and in his 2010 review of a history of capital punishment.
On the same day on the other side of the country, a new public 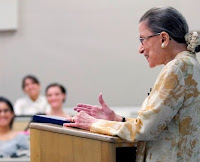 Her apparent reference was to Furman, the splintered 1972 judgment in which a majority of Justices agreed that capital punishment was unconstitutionally applied in the United States, yet disagreed on why that was or what ought to be done about it. Out of that division came the reinstatement of a modified death penalty process 4 years later in Gregg. Stevens had cast an essential vote in Gregg and then spent the rest of his career considering, case by case, its implications.

The Gregg framework was a given when Ginsburg arrived on the Court in 1993. Since that time, she has followed the same adjudicative path as Stevens. Ginsburg "stays engaged with death penalty cases," Elias reported, in order to contribute her own "voice in what's going on." (As already indicated, Elias erred in stating that Stevens voted "automatically" against the death penalty; it was the two former Justices at right, William J. Brennan Jr. and Thurgood Marshall, who did so).
Heard last night from Ginsburg, and her colleagues, were only the words of the Court order quoted above.