In my new position as President of the National Institute of Military Justice, I'm happy to announce that NIMJ and CAAFlog have joined together in NIMJ Blog-CAAFlog, which today joins IntLawGrrls' "connections" list at right. Check it out for the latest news not only about the work of the U.S. Court of Appeals for the Armed Forces, but also about all matter of things related to military justice.
NIMJ (whose board members include IntLawGrrls Diane Marie Amann and Beth Van Schaack) looks forward to its 20th anniversary later this year. We're planning a celebration that 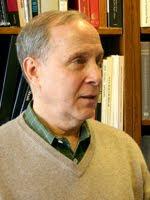 especially will mark the spectacular contributions of our co-founder and longtime President, Eugene R. Fidell (left), to promoting fairness in and public understanding of military justice.
Also wearing my NIMJ hat, recently I submitted the following letter to The New York Times, in response to a Times editorial entitled "The Military and the Death Penalty," which argued for an end to capital punishment within the military justice system after stating that "the military has not succeeded in keeping racial bias out of its judicial process," and that "broad discretion of judges and jurors in military tribunals and the system’s lack of transparency may make it harder to root out discrimination." The letter went unpublished, alas, so here is a chance to read it:

To the editor:
There are many reasons to abolish the military death penalty. But the 'broad discretion of judges and jurors at military tribunals' that your editorial suggests is not one of them.
Military judges and juries are bound by rigorous procedural rules much like the federal court rules. Those rules are enforced by the civilian judges of the U.S. Court of Appeals for the Armed Forces. The new study you cited does not impugn the integrity of the military bench and bar. Instead, it concludes that racial bias could be eliminated by limiting 'death eligible' murders to those with military implications.
Inexperienced counsel and inadequate resources, on the both the prosecution and defense side, are a greater threat to the fairness of U.S. military justice than the limited discretion of its judges. Likewise, the lack of a requirement for fixed terms of office for military judges fails to meet the high standard of due process protection that our all-volunteer force deserves. Congress should address such issues and provide sufficient funding for the proper administration of military justice. Our servicemembers deserve no less.