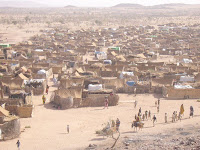 'Over the years,camps have become the standard response. But they should be a last resort.'

-- Jeff Crisp, head of policy development and evaluation at the Office of the U.N. High Commissioner for Refugees. (credit for 2005 photo of camp in Chad for Darfuri refugees) Crisp was quoted in a New York Times commentary in which Pulitzer Prizewinning journalist Tina Rosenberg advocates persuasively for a move away from refugee camps and toward self-settlement programs for refugees.