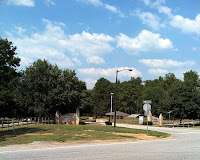 I will always live with these images—with “nagging doubt,” even though I do not believe that any of the executions carried out under my watch were mistaken. I hope that, in the future, men and women will not die for their crimes, and other men and women will not have to kill them. The United States should be like every other civilized country in the Western world and abolish the death penalty.

-- Dr. Allen Ault, dean of the College of Justice & Safety at Eastern Kentucky University in Richmond, Kentucky. As the former Commissioner of the Georgia Department of Corrections. While serving in that position from 1992 until 1995, Ault, as he puts it in this Newsweek op-ed, "built" Georgia's Death Row. (credit for photo of entrance to state's prison center)