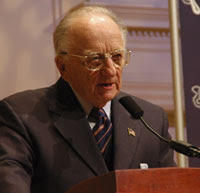 On Thursday, August 25, in a courtroom at The Hague, an old hand took the podium for the Office of the Prosecution of the International Criminal Court.
Joining the closing argument in the ICC's 1st trial was our colleague Benjamin B. Ferencz, 91, who had served as Chief Prosecutor for the United States in the Einsatzgruppen Case, tried before the post-World War II Nuremberg Military Tribunals (below right). (credits for 2009 and 1947 photos, respectively, here and here)
Here is the transcript of the day's proceedings in Prosecutor v. Lubanga, a case on which IntLawGrrls have frequently posted. Ferencz's argument appears at pp. 50-53, and is reprinted in full below:

MR. FERENCZ: May it please your Honours. This is an historic moment in the evolution of international criminal law. For the first time, a permanent international criminal court will hear the closing statement for the Prosecution as it concludes its first case against its first accused, Mr. Thomas Lubanga Dyilo.
I witnessed such an evolution. As an American soldier, I survived the indescribable horrors of World War II and served as a liberator of many concentration camps. Shortly thereafter, I was appointed a prosecutor at the Nuremberg War Crimes Trials, which mapped new rules for the protection of humanity. I was 27 years old then. I am now in my 92nd year. Having spent a lifetime striving for a more humane world governed by the rule of law, I am honoured to represent the Prosecutor and to share some personal observations regarding the significance of this trial.

The most significant advance I have observed in international law has gone almost unnoticed. It is the slow awakening of the human conscience. In 1948, the Universal Declaration of Human Rights proclaimed inalienable fundamental rights of all members of the human family as a foundation of freedom, peace and justice in the world.
Countless human rights declarations have been made over many 10 years by many dedicated persons and organisations, but legal action to enforce those promises have been slow in coming. In Rome in 1998, when the Statute that binds this court was overwhelmingly approved, over a hundred sovereign States decided that child recruitment and forcing them to participate in hostilities were, and Iʹm quoting now from the Statute, ʺamong the most serious crimes of concern for the international community as a whole.ʺ
Punishing perpetrators was recognised as a legal obligation. What makes this court so distinctive is its primary goal to deter crimes before they take place by letting wrong‐doers know in advance that they will be called to account by an impartial international criminal court. The law can no longer be silent but must instead be heard and enforced to protect the fundamental rights of people everywhere.
The Prosecutorʹs office spoke at length meticulously detailing grim facts establishing the responsibility of the accused for the crimes alleged. The evidence showed that waves of children recruited under Mr. Lubangaʹs command moved through as many as 20 training camps, some holding between 8 and 1.600 children under age 15. But words and figures cannot adequately portray the physical and psychological harm inflicted on vulnerable children who were brutalised and who lived in constant fear. The loss and grief to their inconsolable families is immeasurable.
Their childhood stolen, their childhood stolen, deprived of education and all human rights, the suffering of the young victims and their families left permanent scars. We must try to restore the faith of children so that they may join in restoring the shattered world from which they came.
Imagine the pain of mothers crying and pleading at the door of the camps, still suffering and wondering what happened to their children. Picture the agony of the father who said, ʺHe is my first son. All of my hopes were laid on him. The child was ruined. Today he can do nothing in his life. He has abandoned his education, and this is something which affects me greatly.ʺ
All of the girls recruited could expect to be sexually violated.
All of these events which the Prosecution has carefully presented have been proved beyond reasonable doubt. Once again the case we present is a plea of humanity to law. It was a call for human beings to behave in a humane and lawful way. The hope of humankind that compassion and compromise may replace the cruel and senseless violence of armed conflict, that is the law as prescribed by the Rome Statute that binds this court, as well as the UN Charter that binds everyone. Vengeance begets vengeance. The illegal use of armed force, which is the soil from which all human rights violations grow, must be condemned as a crime against humanity. International disputes must be resolved not by armed force but by peaceful means only. Seizing and training young people to hate and kill presumed adversaries undermines the legal and moral firmament of human society.
Let the voice and the verdict of this esteemed global court now speak for the awakened conscience of the world.
Thank you.