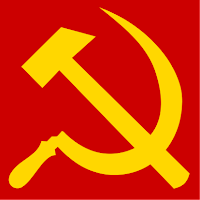 On this day in ...
... 1959, the 1st human-made artifact hit the moon: a space rocket containing "pennants and the hammer-and- sickle emblem of the Soviet Government." (image credit) It was traveling 7,500 miles per hour when it crashed; its journey had taken 35 hours. Occurring amid the Cold War space race, the feat prompted a flurry of U.S.-Soviet remarks about each other's prior failed attempts to reach the lunar surface.