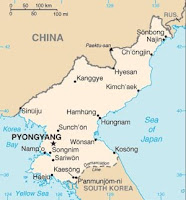 On this day in ...
... 1999, 4 days after North Korea (right) had agreed to suspend its long-range missile tests, U.S. President Bill Clinton ordered an easing of economic sanctions against North Korea. An effort to encourage ultimate abandonment not only of the testing, but also the North's entire nuclear weapons plan, Clinton's order constituted "the most extensive relaxation of sanctions against the North since the Korean War," The New York Times' David Sanger reported. (map credit)