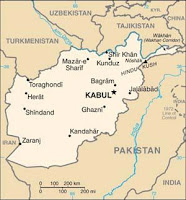 President Bush ordered heavy bombers and other aircraft to within easy striking distance of Afghanistan today and insisted that its ruling Taliban turn over Osama bin Laden and other suspected leaders of a terrorist organization believed to be behind last week's attacks in New York and Washington.

Thus began a post-9/11 counterassault on then-Taliban-controlled-Afghanistan that, as we've frequently recounted, continues to this day, notwithstanding the passage of a decade, the change in U.S. administrations (prior posts), and the killing of bin Laden (prior posts). (map credit)