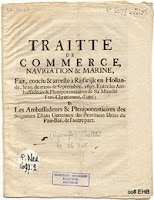 On this day in ...
... 1697, the 9 Years' War in which France fought against a Grand Alliance comprising England, Spain, the Holy Roman Empire, and Holland came to an end with the signing of the Treaty of Ryswick (left) in what is now Rijswijk, the Netherlands. Territories were shifted; examples: In what is now Canada, the result of the treaty was land swaps between 2 colonial powers, with France acquiring Acadia and Britain acquiring Newfoundland. In the Caribbean, Spain recognized French control of part of the island of Hispaniola -- today, the Republic of Haiti. (photo credit)