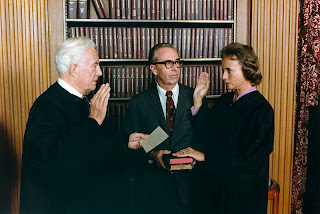 Sandra Day O'Connor took her seat today as the 102d Justice and the first woman to serve on the United States Supreme Court.
President Reagan, who fulfilled a campaign promise to name a woman to the Court by nominating the 51-year-old Arizona judge, attended the brief ceremony in the courtroom. It was the first time a President had visited the Supreme Court since President Ford attended Associate Justice John Paul Steven's swearing-in ceremony in 1975.

(credit for photo of Chief Justice Warren E. Burger administering the oath to Justice Sandra Day O'Connor; at center is her husband, John O'Connor) As described in our previous posts, O'Connor would serve until January 2006. Earlier this month she made a public appearance at Philadelphia's National Constitution Center, part of her ongoing effort to improve Americans' civic education.